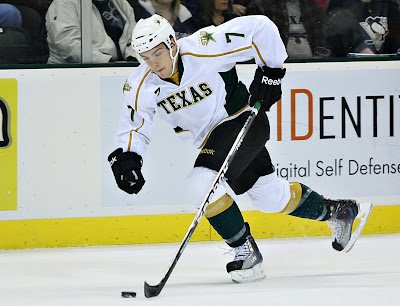 Fresh off his hiring as head coach of the Texas Stars, Jeff Pyle was busy on the ice in training camp last September, trying to acclimate himself to the Stars’ systems and players alike. During a break, one of the forwards skated up to him, “My dad wanted me to say hello.” Pyle paused for a second, racking his brain, then the last name clicked: Sceviour.

The reason why the name clicked was a lost connection from over twenty years ago when Pyle spent three seasons between the IHL and Europe playing with Darin Sceviour, father of current Stars forward Colton.

Coach Pyle and Darin Sceviour first played together with the Saginaw Generals of the IHL. The Generals advanced to the second round of the 1987 playoffs but fell to the Muskegon Lumberjacks. Pyle co-led the league in points that year with 136.

“At the end of the playoffs, we had a team from Europe come in and make an offer to [Darin and me]. They gave us three days to make a decision. It was pretty tough. We decided to go, since the money was pretty good.”

The glitter of a bigger paycheck in Europe was a gilded promise for the two, as the club was in dire straits.

“It ended up being a terrible situation. We got there, I remember to this day, on July 19th. We got there and found out that we did not have a very good team. They were either going into bankruptcy or just coming out of it.”

Pyle was a joker though, always trying to make the best of a bad situation, while Darin was more straight-laced. The team was having trouble gelling as a group, since most of the players worked during the day. Darin and Pyle were two of the only players available for daytime practices. Instead the coaches tried to force togetherness, often with group stretching or running before games to warmup.

“We always had to go for a stretch or a run. We’re running behind this arena, and there’s a little golf course, and I’m pumped. I said, ‘Wait, everybody stop.’ I started doing snow angels in the middle of the sand trap. Darin just looked at me and shook his head.”

After just fourteen games, Pyle, a left winger, was playing defense most nights because the defense was "brutal". He ended up leaving midseason while Darin stayed on and became the leading scorer for the club. The two didn’t play together for the rest of their playing careers, though they stayed in the same division, 2-Bundesliga.

Despite all the rough times in Europe with team bankruptcy, questionable on-ice skill, and even issues with getting paid at times, Coach Pyle still speaks highly of the experience. “We went over there for two year and stayed for ten. I wouldn’t change a thing.”

In 1989, while Darin was playing for Neuss SC, Colton came along. “I was born in Canada,” said Colton. “My mom flew back to have me around family. I spent my first few years back and forth between Alberta and Germany.”

Darin left Europe in 1991 and is now a building inspector in Alberta but also scouts for the Lethbridge Hurricanes, Colton’s junior team. He coached both Colton and his younger brother, Logan, all through their youth. 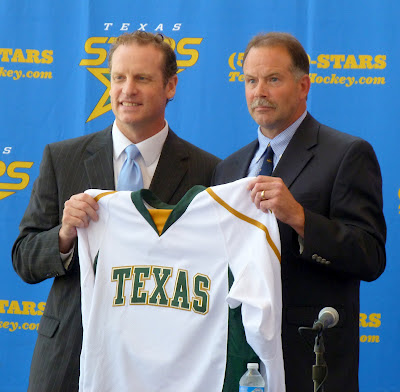 The Stars players, including Colton, checked up on the Stars website regularly over the last summer to see who would be their next coach. When the announcement came, Colton told his dad. “My dad recognized the name but wasn’t sure; he laughed when he saw [Pyle] was the coach.”

After that initial exchange on the ice in Dallas, Colton gave Coach Pyle his dad’s number and the two reconnected after a game while Darin was in Austin in October.

“They talked for the first time since the 80s,” said Colton. “My dad was down here [early in the season], and they grabbed a beer. It was like they’d been talking forever.”

As to their games, Coach Pyle notes that they are very similar players. “They both play a similar style. Darin was a right wing; he could fly. Colton is more of a skill guy. I don’t want to say Colton has more of an upside, because they’re both really good.”

Colton wouldn’t mind the extra praise though, as he and his dad have been in constant jocular competition comparing their hockey careers. Darin got into one game with the Chicago Blackhawks, and Colton is also at one game (at Flyers on February 5th 2011).

"He still tells me he knows more than me about hockey, but I told him once I get my second game, I’ll know more than him. At that point, I’ll have something to stand on. Right now, he’s got me on that.”
human interest interviews