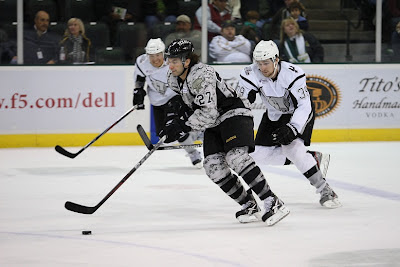 Angelo Esposito had a goal in tonight's game against his former team. (Credit: Portraits by Deena)

The Rampage took tonight's contest over the Stars by scoring a power play goal in the final ten seconds of regulation to win 4-3. Tonight's win was just their fourth all-time in Cedar Park. After allowing the first two goals, Texas fought back from a 3-2 deficit to tie things in the third period. "We played pretty hard and waited for opportunities to tie it up," said Coach Pyle.

With 6.5 seconds left, and on the power play, San Antonio found the back of the net to win it 4-3. "That's a bad bounce," said forward Luke Gazdic. "We were working hard, but we could have cleaned that up a little bit."

Andrew Raycroft started the game for Texas but Tyler Beskorowany finished it due to an injury to Raycroft suffered in the first. No indication on a timetable for the injury.

San Antonio opened the scoring in this one again tonight. Jon Matsumoto tipped a harmless looking Evan Barlow shot on a drive to the net to bewilder Raycroft and break the scoreless tie 13 minutes in. Just two minutes later, a 3-on-2 would generate the Rampage's second of the night. "Our forwards have to do a better job defensively," said Pyle. "The goals we gave up were too easy."

Tyler Beskorowany started the second and the team responded, generating chances and eventually the team's first goal on a mad scramble in front of Dov Grumet-Morris. Esposito scored his 6th of the year on the play, assisted by Gazdic and Drew Schiestel. Schiestel's assist was his third in as many games with the Stars.

The Rampage earned a 3-1 lead just a minute later though as Bill Thomas charged down the slot to finish off a puck sitting idle off a scramble in front of Tyler Beskorowany. The goal was Thomas's 20th of the season.

Matt Fraser would do him one better just two minutes later as the young forward broke the franchise record for goals in a single season with his 28th, a shorthanded tally no less. Texas would end the second in the same spot as last night, down one.

The Stars came back in the third to tie things thanks to a cram play from Francis Wathier that creeped over the goal line. Colton Scveiour's assist on the goal extended his home point streak to sixteen games. With OT looming, Stars captain Brad Lukowich took a penalty for interference on a breaking James Wright. It was a tough call, given the precedent set through the night for minors, but it was a by the book call. "With two minutes left, the puck has to stay deep," said Pyle. "We can't put pressure on the D like that. The call was what it was."

With 6.5 left, it was San Antonio's Michael Repik with his 11th of the year, a bouncing broken play that ended up on his stick and then into Texas's net. The Stars called a timeout, but a faceoff win by San Antonio ended the game at 4-3 for the Rampage.

Texas pointed to the mental side of the game for the loss in this one. "You've got to play smarter and we haven't been able to grasp that at times," said Pyle.

Meanwhile, Gazdic added, "It's basically who makes the first mistake. It's really cliche, but it's whoever works harder and capitalizes on mistakes."