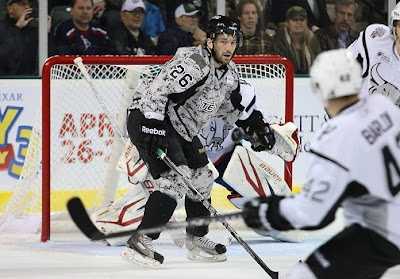 Mike Hedden screens San Antonio tender Jacob Markstrom in tonight's game. The Stars will wear their military appreciation jerseys again tomorrow night. (Credit: Portraits by Deena)
Colton Sceviour scored his 16th of the year in overtime to push Texas past San Antonio and extend his personal home point streak to fifteen games this evening. Texas was down 3-2 heading into the third period but rallied to tie thanks to Matt Fraser's team-leading 27th of the season. "A comeback win against that team in the third period is a good win," said Coach Pyle. "We've always fought back. This team has no quit in it. We're going to play to the final whistle of the final game."

Neither team led by more than a goal at any point as the two clubs played a tight game throughout, as is to be expected from two teams that know each other so well. "With a team like San Antonio, we play them so much that it's like a chess match," said Sceviour postgame. "I could go over there and play their system and they could play ours no problem. We see each other that much."

Former Star Greg Rallo got things started early in the first, being left completely open on the backdoor and potting his 17th of the season for the 1-0 lead. "The first one bounced crazy and ended up with the wrong guy," said Pyle. "Bottom line, it was a bad break."

The Stars answered in the second period with a Dan Spang point shot that found twine from the blue line and tied things at one all. Texas blew defensive coverage a few minutes later as no one picked up Bill Thomas on a rush into the Stars zone and he lasered one past Raycroft for a 2-1 lead. Mike Hedden answered back under a minute later with a puck shot from the left wing goal line that ticked off Markstrom's right shoulder and into the net. San Antonio would exit the third with a 3-2 lead though as James Wright polished off a pass from Rallo.

Texas picked it up in the third, outshooting the opposition 9-3 and, more importantly, outscoring them as well. "In the third we played really well and got back in it," said Pyle. Matt Fraser scored his 27th of the season and 8th against the Rampage for the three all tie.

Texas got a few chances at the power play late in the third, but could not convert and went to OT with the Rampage, a very common occurrence between the two at the CPC. In the end, it was Drew Schiestel who was an overtime hero again. Using the time and space that San Antonio gave him to wait out a play and generate the game winner. "It felt like I stood in front of the net for two minutes, but it was just ten seconds," said Sceviour of Schiestel. "He kept waiting and waiting."

When he finally fired the puck on net, Sceviour finished off the play to set Texas at a 4-3 margin of victory over their neighbors to the south. Andrew Raycroft finished the game with 25 saves on 28 shots. Expect more of the same tomorrow night as these two teams battle again.

Mathieu Tousignant is out "for a while" with an injury, according to Coach Pyle.