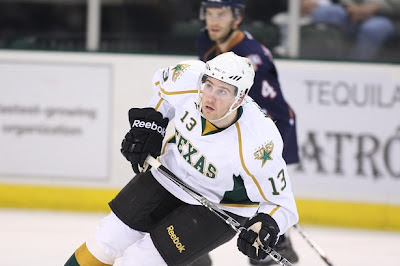 Shawn Weller had his first goal as a Texas Star tonight. (Credit: Portraits by Deena)

Tonight, the Oklahoma City Barons showed Texas why they are a favorite for the Calder Cup this year. "They've got four good lines and got goals from their third and fourth lines tonight, which is huge," said Coach Pyle. The Stars once again got behind early, which has been typical this season. "We got behind tonight again and we had chances to get back into it."

The power play, despite going 2/7 on the night, didn't score at the right times. Texas went 0/5 on the power play in the first and second and trailed 4-1 by the time they collected their first PPG. "We were getting chances, but they weren't finding their ways through," said Stars center Travis Morin. "You can move it around the outside and look good, but you have to get people in front of the net."

Tanner House got things started for OKC early in the first period with his fifth of the year. The rebound goal off the initial shot from Ryan Martindale came 3:25 into the game.

Shawn Weller answered right back for the Stars. Texas had the Barons out of sorts in their own zone, and Weller scored with a spin-o-rama backhand move in front of the net. Morin and Schiestel assisted on the play, which came just 76 seconds after the Barons' goal.

Thigns calmed down a bit from there until halfway through the period when Philippe Cornet broke through the Texas blue line, wearing two defensemen like a coat and scoring his 23rd of the year to make it 2-1 OKC.

Hunter Tremblay scored two minutes later as the Stars' ineffective power play allowed a short-handed goal. The shorty was Texas's eighth shorthanded goal against on the season. The two-on-one distracted the defenseman, Spang, as Tremblay went shot all the way for his 14th of the year. "The shorthanded goal killed us," said Pyle. "The start [overall] kills us."

To start the third, David LeNeveu made a few spectacular saves in the Barons zone and, as it often does, that led to a good chance at the other end. Dylan Yeo wired one from the left wing circle for a 4-1 Oklahoma City lead.

Texas's power play finally caught on in the third period, but it was too late. Colton Sceviour scored his 17th of the year, with assists from Wathier and Lukowich, at 6:34. With the 6-on-4 advantage late in the game, Francis Wathier ripped one glove side high on LeNeveu to make it 4-3 OKC.

Schiestel and Lukowich started on defense but then switched the paitings listed above.