Stars Eke Past Griffins 5-4 in OT 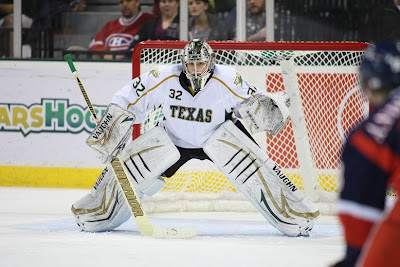 Despite a third period swoon, Stars goalie Tyler Beskorowany posted his 10th win of the season tonight with a 31 save effort. (Credit: Portraits by Deena)
The Stars pulled off a 5-4 OT victory over the Griffins this evening in Cedar Park, an unnecessarily close final score in a game that seemed to be all Stars early. Texas used a three goal second period to accumulate a four goal lead after two. Grand Rapids mounted a four goal comeback in the third to tie things and take it to OT. "We just got sloppy," said Coach Pyle. "4-0 in any league is no gimme." Newcomer Michael Forney tipped a point shot from fellow newcomer Drew Schiestel two mintues into OT for the game winner.

The Griffins have seen their luck turn around recently and are believing they can win thanks to strong play from their top forward and from goaltender Ty Conklin. Texas has to bring their A game against these desperate teams. "Bottom line, it never should have happened. The guys in the room have a find a way to be better and do the little things."

The Griffins came in playing a gritty game, a lot of it centered on former Griffin Mike Hedden. Early period action lacked flow for Texas with a lot of stoppages for icing and offsides. Mike Hedden got the flow going with a tap in goal on a nice shot-pass from Brenden Dillon on a delayed penalty. Texas closed the first up 1-0.

The Stars came alive in the second with Francis Wathier's 14th of the year kicking things off on the power play just twenty-two seconds in. Travis Morin followed that up with a bad angle shot from the left goal line, bouncing the puck in off Conklin's shoulder. Fourteen minutes in, Luke Gazdic popped home a paunchy rebound for a four goal lead and what seemed to be a real rout.

The strong play of Tyler Beskorowany in the second masked the deficiencies in Texas's middle frame play. Several times Beskorowany stopped pucks he had no right to stop, including several one-on-one chances practically in his lap. That would not stand through the third.

Grand Rapids potted their first and second goals in the first 3:30 of the period, prompting a Texas timeout to regroup. Coach Pyle chalked many of the goals to blown defensive assignments, leaving guys open who should have been marked. At 11:50 of the third, former Stars prospect Chris Conner put home a puck off the rush to make it 4-3. Curt Fraser would pull Conklin with a minute left. The Griffins only needed ten seconds to make it work as Chris Minard's 13th of the year tied it at four.

Michael Forney was the overtime hero, scoring his first AHL goal two minutes into the frame on a tip of a Schiestel shot. Fellow newcomer Shawn Weller was also on the ice for the goal. In postgame, Coach Pyle avoided a question about the newness of the lineup on the ice for the OT goal.

Texas now faces San Antonio for a pair this weekend at home. The Rampage look to be in pole position for their first playoff berth in years. They will be intent on making sure Texas does not trip up their path.