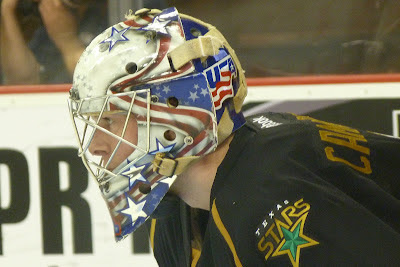 Regardless of the outcome of tonight's game, starting Jack Campbell sent a message to the Texas Stars that the future is now. GM Joe Nieuwendyk is looking to shake up Texas next year. That started tonight at the Cox Convention Center. Despite the 3-1 loss, Jack Campbell stopped 32 of 35 against and made several high quality saves among the routine ones. Austin Smith had three shots on net and a minus-2 rating. One of those goals against came on a turnover by the rookie in his first game.

Mike Hedden picked up the lone Stars goal in the contest.

Campbell stopped 13 straight shots early but beat for his first pro goal against by a screened point shot from Kevin Montgomery 13:56 into the game. The Stars were outshot 15-5 in the first period but were only down 1-0 after twenty.

The Barons added two more in the second period. After an early surge by Texas, outshooting the Barons 11-4 early in the middle frame, OKC was the first to score in the period. Anton Lander got his first AHL goal on the fifth shot of the period for OKC, tipping a Colton Teubert point shot into the net.

Texas got one back quickly though as Mike Hedden's unassisted tally, his 12th of the year cut the lead to 2-1. Just seconds later, an Austin Smith turnover put the puck on the stick of Tyler Pitlick, who passed to Mark Arcobello for a 3-1 lead. Texas would bomb 20 shots on Yann Danis in the period to OKC's 13.

The Stars and Barons would skate to a scoreless third with Texas outshooting OKC 10-7. The Stars would go 0/5 on the power play tonight, including an extended 5-on-3 in the second, as the Barons shut down one of their most effective scoring avenues.