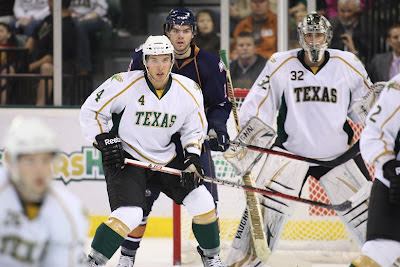 Brenden Dillon had a goal and an assist in tonight's game. (Credit: Portraits by Deena)
The Stars came out to a two goal lead in the first and led after the second 3-2 but ultimately fell 4-3 in regulation. The loss marked their first regulation loss when leading after two on the season. Brenden Dillon picked up a goal and an assist and Matt Fraser added his 30th of the year as Texas fell 27-31-2-2 on the season.

"We don't deserve the playoffs," said Coach Pyle. "I've said from day one: we're riverboat gamblers. You win by the sword; you die by the sword. We deserve what we've got. We've earned the position we're in, even with injuries and callups we've had chances to win. We put ourselves in a position to win and then we don't follow through because we don't have guys committed to the team."

Texas got the scoring off to a quick start in the first period. Brenden Dillon bombed a shot from the point that bounced off the glass behind Danis and rebounded off the goalie's skate to make it 1-0. Travis Morin assisted on the play.

Exactly twelve minutes later, Mike Hedden picked up his 11th of the year thanks to a defensive misplay by OKC's giant, Kirill Tulupov. The big man missed the puck with Hedden hard on the forecheck and the Texas forward made no mistake, finding twine behind Danis for the 2-0 lead. Tyler Beskorowany kept up his part of the deal in first as well with great glove work to kill the play when needed.

OKC got their first in the middle frame in much the same way. A misplay by Travis Morin gave forechecker Ryan Keller a clear path to the net, where he beat Beskorowany to cut the lead in half. "That can't happen," said Pyle. "It's kind of embarrassing. Our leaders have to take care of the puck"

Four minutes later, Texas was out of sorts with two straight minors against them. They killed the first but allowed a PPG in the second. As Texas was distracted by a clear they though was offsides, Bryan Helmer zinged the puck to the net from the point to tie things at two all.

With time ticking down in the second period, Matt Fraser found himself breaking out on a 2-on-1 from the neutral zone. It was no surprise when the rookie chose to shoot and scored his 30th of the year to make it 3-2 Texas.

Texas went to the third period with a lead, a situation in which they had never failed to collect a point this season. The Stars allowed the game tying tie early in the third though as Taylor Chorney popped one past Beskorowany with Mike Hedden still on the ice on the halfwall after an uncalled trip. Of the penalty calling, Pyle added, "It doesn't matter what they call. You've got to adapt to it."

The Stars killed a two minute long 5-on-3, which whipped the crowd into a fury, and even earned a 58 seconds two man advantage of their own. Neither team would score on their power play.

The game winner came when OKC broke into the zone and all the Stars skaters collapsed on the skater with the puck. An uncovered Mark Arcobello received a pass out of the fracas and potted his 13th of the year into the practically empty net for the 4-3 win.