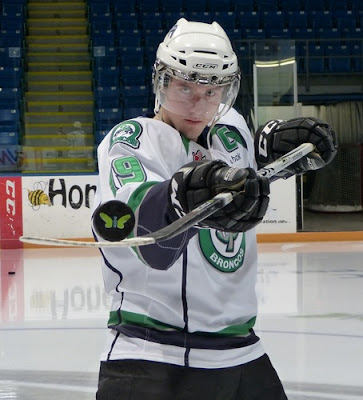 The WHL scouts for the Dallas Stars have been busy these past few seasons. After picking up Jamie Benn in the fifth round in 2007, Dallas got Matt Fraser and Brenden Dillon as undrafted free agents last year. This year, it's Taylor Vause of the Swift Current Broncos.

Vause was the team captain for the Broncos, collecting a team high 37 goals, 46 assists and 83 total points. He led in power play goals as well at 15.

Another part of the signing that I really like is Vause's interests in areas other than hockey. For example, he designed his team's pink in the rink and St Patrick's Day other charity jerseys, which you can learn more about in this article from icethetics.

Also, Taylor is on Twitter at @WizardofVause (giving you a hint on how to pronounce that name). That links to his hilarious collection of photoshops of various NHL players onto movie posters. The kid's got talent and he's funny? Leader and a goal scorer? Love the signing.

The Texas Stars announced on Monday that center Taylor Vause (pronounced - VOSS) has been signed to an ATO (amateur tryout agreement).

Vause turns pro after completing a five-year campaign with the Swift Current Broncos of the WHL. The Calgary, Alberta native led the team in scoring, posting career highs in goals (37), assists (46) and points (83). The 20-year-old also led the team with 15 power-play goals. Over the course of his WHL tenure, Vause scored 79 goals and assisted on 110 others for 189 points in 273 games.