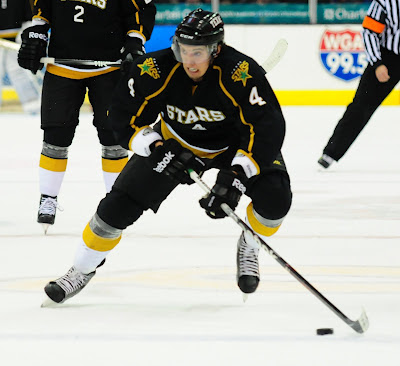 Brenden Dillon jumps up in the offensive zone in tonight's game in Cleveland. (Credit: Ben Hall)
Two rookies played a big part in the Stars 4-3 shootout win over the Lake Erie Monsters this evening in Cleveland. Jack Campbell stopped 36 of 39 and 5 of 7 in the shootout to win his second pro game. Taylor Vause scored the shootout game winner in the 7th round to seal the extra point. Austin Smith and Colton Sceviour also scored in the shootout.

Lake Erie got things started in the first just as a Texas penalty expired when Cameron Gaunce found a rebound of a Brad Malone shot to make it 1-0 after 20.

Texas bombed the net in the second period, earning a 17-11 shots advantage in the period. However, the dam didn't break until late when Travis Morin intercepted a Monsters' pass and popped home a SHG on the backhand. Two minutes later, Mike Hedden extended his scoring streak to three games with his 14th of the year off another turnover, generated this time by Francis Wathier.

The Monsters would tie it up in the third period on a rebound goal by Greg Mauldin. Francis Wathier stormed back for Texas with an unassisted tally seven minutes in, slapping the puck off Danny Richmond's stick and into the Lake Erie net.

Mike Connolly would force overtime for the two teams, tying things at three with just under two minutes left in the game.

Texas did not get a shot off in overtime but held on due to the stellar play of Jack Campbell, who stopped all eight he faced. Colton Sceviour, Austin Smith and Taylor Vause all scored in the shootout, which lasted seven rounds. Campbell stopped five of seven and earned second star honors for the second straight night. Vause earned his first star of the game, a first star, for the SO GWG.