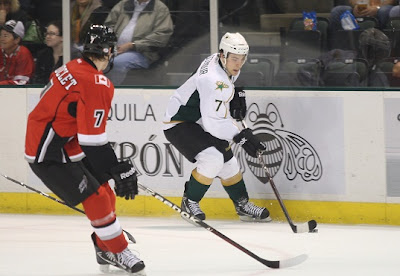 Colton Sceviour scored on a penalty shot in the first and at even strength in the second. (Credit: Portraits by Deena)
The Texas Stars set an unfortunate franchise record this evening with a loss to the Abbotsford Heat. The club has now lost five straight games, their previous record being four. "We're going to start working harder in practice," said Coach Pyle. "If we're not working hard enough in games, we'll do it in practice."

Texas got an early lead, but lost it in the second and never regained their footing. "We're so fragile at times," said Coach Pyle. "We struggle in our D zone and we're not handling the pressure really well."

Texas drew first blood on a penalty shot late in the first. Colton Sceviour was hooked on a breakaway by Chris Breen. Sceviour pulled out his signature move for the penalty shot, backhand shelf. "I don't think I'd had a shot against him since junior," said Sceviour. "I just went with that move since it's worked so well." The Stars would carry the one goal lead to the intermission.

Abbotsford evened things up and jumped ahead a bit in the second. Brian Connelly bombed a shot from the point that deflected off Dustin Sylvester just left of the net for the tie. Beskorowany had no chance on the shot, coming just 54 seconds into the middle frame.

With time winding down, Colton Sceviour potted his second of the night on a scramble in front, popping his goal in from right on the goal line. Linemates Wathier and Glennie assisted on the play, which brought it to a 3-2 deficit for Texas after forty minutes.

The third period was all Abbotsford though as Ryan Howse added his second of the game with a backhander off a mess in front of Tyler Beskorowany. "The goals we give up are so easy," said Coach Pyle. Andy Brandt popped in his first AHL goal to rub a little salt in the wound with seven minutes left. The forward was just in the right spot in the slot to receive a pass with traffic in front and laser one back Beskorowany.