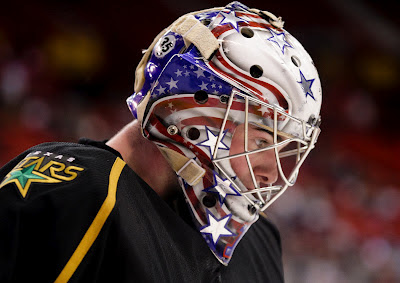 You might have heard about the Texas Stars' (28-33-2-2, 60 pts, #15 Western Conference) new additions over the past week. As the clock winds down on a disappointing season, Texas got a youth infusion over this past week that will make a difference in the next ten games and fans hope will stick around into next year.

Jack Campbell is the big name among the three new players. The 2010 draft pick joined the team mid-week and started both games this weekend. It wasn't an easy task as the Stars' faced the #1 and #2 teams in the conference. Campbell collected his first pro win against the #2 Toronto Marlies (Toronto Maple Leafs) on Sunday, carrying a shutout through forty minutes. Campbell made high quality stops with ease and handled the puck frequently in both contests. He is expected to get most of the starts for the rest of the season.

Coming in from the collegiate ranks was Austin Smith, the 2007 fifth rounder out of Colgate. Smith immediately joined the Stars' top line with Colton Sceviour and Francis Wathier. Smith had a minus-3 rating with six shots on the weekend. The line generated opportunities, but I am going to hold off judgement until I can see him with my own eyes.

Finally, Texas picked up Taylor Vause out of the WHL on an ATO, as I mentioned last week. The centre ice man scored his first pro goal, which he was very proud of, in Sunday's game at Toronto.

This week, Texas will add Alex Chiasson out of Boston University. Fans at the Cedar Park Center will have to enjoy his play while they can, as he is slated by many to make the NHL roster next season out of camp.