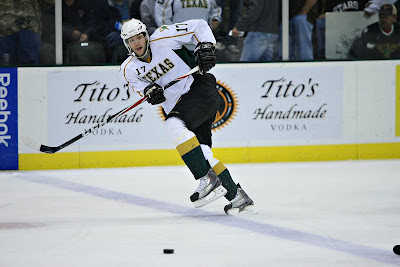 Remember this guy? He's coming to a rink near you this week. (Credit: Ron Byrd)
With the Dallas Stars' season ending on Saturday night, Texas received four players from the NHL club to finish out the final four games in the AHL. Scott Glennie, Brenden Dillon, Jordie Benn and Tomas Vincour were the assignments. In addition, Hubert Labrie has been assigned to Idaho to help them in their winner take all game tonight in Ontario.

The oddball on this list might be Tomas Vincour. However, he was on the Stars' clear day list and was a quality contributor at this level this season before his callup. He will probably bump a guy like a Shawn Weller from the lineup, as Vincour will almost certainly join the top lines for the remaining four games. Expect Joe Nieuwendyk to be in town for at least one of the two remaining home games to evaluate the talents of Campbell, Smith, Chiasson and others.

Finally, Labrie will be a much needed addition to the Idaho blue line. Thanks to injuries and some borderline suspensions, Labrie is the sixth D in Idaho. He will probably get heavy minutes there as they play their fifth game of a best-of-five, facing possible elimination at the hands of the Ontario Reign.
dallas stars idaho steelheads roster moves