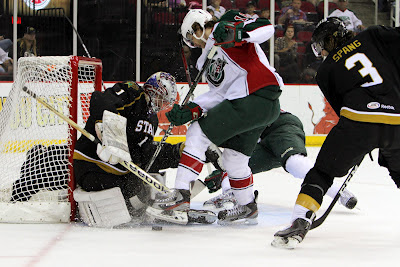 Campbell was under siege today, stopping 31 of 33 shots. (Credit: Rick Bocchini)
In a game with playoff implications across the conference, Houston needed a little bit of help but their first order of business was two points against the Texas Stars. After the first period, they knew they'd gotten the help. It was up to them from there to win. Texas opened the scoring in the second, but Houston answered with two goals to get the final W of the regular season. Texas finishes the season at 31-40-3-2 and Houston will be going to the playoffs.

Texas and Houston skated to a scoreless first period despite 21 combined shots in the frame. Fifteen of those came from the Houston Aeros in the direction of Jack Campbell. Campbell, starting his third game in as many nights, got no help from his teammates in terms of shot blocking in the first. Despite that, it was scoreless after one.

The Stars opened the scoring in the second period with Brenden Dillon getting his 6th of the year on a sharp angle shot. The puck bounced off goalie Matt Hackett just the wrong way and went in to make it 1-0 for Texas.

The Aeros tied it up with 2:33 left in the second on a rebound goal by Kris Foucault. Houston would finish the period on the power play but things would be even at one after forty.

A strong forecheck from Joel Broda forced a mishandle by Jack Campbell just 31 seconds into the third. Broda poked it past Campbell for the 2-1 lead.

Texas gave it their all in the last few minutes of game 76. They pulled Campbell and called a timeout to try and spoil the Aeros' season. Hackett stood tall and the Aeros will start their playoff push Wednesday or Thursday against OKC.