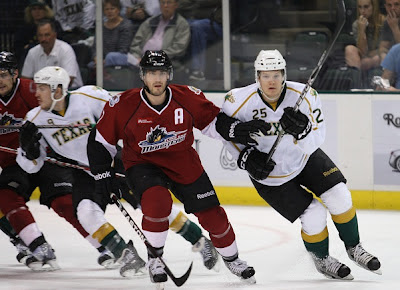 Matt Fraser eyes the puck in tonight's game. (Credit: Portraits by Deena)
Before men and their best friends alike could find their seats in tonight's game, the Stars were already down 2-0. By the end of the first, Texas was looking at a four goal deficit, and the air was out of the building. "You could tell how fragile we are [mentally] in this game," said Coach Pyle.

Despite scoring four of their own, they still took a four goal loss, thanks to the eight spot dropped on them today by the Lake Erie Monsters.

"I don't think we came out ready to play this one," said forward Mike Hedden, who had a late goal in the game. "Every time we'd get it close, they'd come down and score. Those are supposed to be statement shifts. That out there tonight was embarrassing."

The embarrassment started early with Lake Erie scoring on their first two shots of the night and first two shifts of the night. Both were due to defensemen not clearing out players in front. The first goal was a tip in the high slot that a blue liner should have covered and the second was through a screen that should have been cleared out.

"The first two goals were bad bounces," said Pyle. "Campbell might have been tired, but we needed to do a better job in front of him."

Lake Erie struck again late in the period. Justin Mercier broke in alone and snapped one over Campbell's left shoulder for the 3-0 lead. The fourth goal came off a point shot that appeared to come out of the zone. Coach Pyle and the fans at the CPC were in agreeance on that point, but the goal stood to make it 4-0 after one. Tyler Beskorowany would replace Jack Campbell after one.

Texas got on the board in the second with Colton Sceviour's 20th of the year. He accepted a deft little through the legs behind the back pass from Wathier and potted to goal as Pickard was caught swimming. Just 29 seconds later though, Lake Erie set the deficit at four once again with their fifth.

Next shift letdown goals against were endemic for the Stars tonight. "The next line that goes out needs to find a way to make something happen," said Pyle. "We put ourselves in positions where you aren't going to be successful."

The Stars power play came alive in the middle of the period for two quick goals. Colton Sceviour got his second of the night and 21st of the season, snapping one far side on Pickard through traffic. Travis Morin beat Pickard near side from almost the same spot on the next Texas power play to make it 5-3, a manageable deficit. Only forty seconds later though, Ryan Stoa restored the three goal lead for the Monsters to set the score at 6-3 after two.

Lake Erie would tack on two more in the third period while Texas added one of their own off a turnover. Luke Gazdic would pick up a puck and Hedden collected the rebound for the 8-4 tally. With the goal, the loss officially went in the books for Tyler Beskorowany, as he allowed the game winning goal.

Taylor Vause has been lost for the season with a leg injury.