Playoffs: Steelheads Move On, Americans Do Not 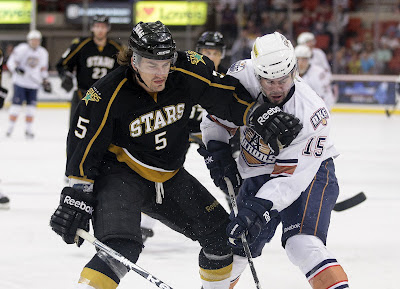 Hubert Labrie in a March 23rd game against OKC. (Credit: Steven Christy)
Texas's two feeder clubs were both involved in their league playoffs this week. Allen battled the Texas Brahmas in the first round of the CHL's Ray Miron Cup Playoffs. Idaho took on the Ontario Reign in the Kelly Cup Playoffs.

Idaho advanced out of the first round with a decisive 5-0 victory over the Reign. The best of five series went all five games, concluding in Ontario on Monday night. Idaho goaltender Jerry Kuhn stopped 46 shots for a shutout. The series had been marred by odd penalties and a very dirty overall game from the Reign. For example, Kuhn was given a major penalty and a game misconduct in the second period of Game 2 for clipping. The series averaged forty PIMs per game between the two teams.

I've had good reports of Hubert Labrie's play in Game 5. He laid a devastating open ice hit in front of the Steelheads bench in the early stages of the first period. The hit really energized the bench and set the tone for the rest of the game. Labrie was plus-2 with no points.

The Steelheads will face the Las Vegas Wranglers in the second round, starting on Monday night in Las Vegas.

The Allen Americans were not so lucky. Facing elimination in Game 6 of their best of seven against the Brahmas, the Americans fell 4-2 at Texas. The Brahmas jumped out to a 3-0 lead in the first two periods. Allen scored two goals just 53 seconds apart but Texas netted the ENG in the dying seconds of the third to set up the win.

This is the first year that Allen has not advanced past the first round of the CHL playoffs. They made it to the Miron Cup Finals in their first season and to the Berry Conference Finals last year. Allen was 6-2 in possible elimination games coming into last night's game.
allen americans idaho steelheads playoffs