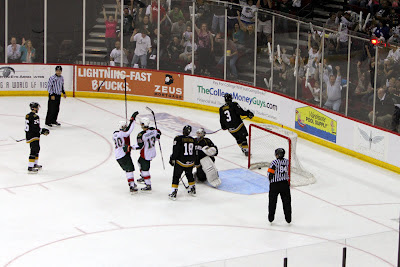 The 2011-12 campaign came to an end this weekend for the Texas Stars (31-40-3-2, 67 pts, #15 Western Conference). For the first time, this franchise is not going to the playoffs. Less than twelve hours after returning from their final road trip, the axe fell. Dallas announced the firing of Coaches Jeff Pyle and Truitt. As the saying goes, you can't fire all the players.

Realistically, this is something that most have been anticipating for a while. Rumors of Pyle losing the room and conflict with veteran players have been bubbling up for a while. Dallas has also not been pleased with Texas's performance this season, as Joe Nieuwendyk told ESPN Dallas yesterday.

Despite lip service at the beginning of the season that the major and minor league clubs would match up their on-ice systems, they never did. Coach Pyle's heavy forechecking style never changed and didn't mesh well with Coach Gulutzan's more defense-first systems. GM Scott White has a stated desire to build his teams on solid D and goaltending, neither of which was solid under Pyle this season.

Texas now has a 50/50 record on ECHL coaches. My bet is that Joe Nieuwendyk spends a lot of time looking at NHL assistants. The organization needs a coach who has a proven record of developing prospects to NHL success. That search will probably start in earnest once the playoffs are over.