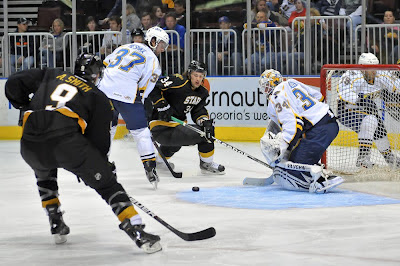 It's all downhill from here for the Texas Stars (30-38-2-2, 64 pts, #15 Western Conference). With just four games left on the schedule, the season is officially reaching its end this week. Texas will have its full roster of Clear Day players for the final four games, including recently assigned Tomas Vincour, and all of their ATO signees as well.

In a rough season, the key at the end is to find positives to build on for next season, not only for Texas but positives that will trickle up to Dallas. First among these is one that Dallas fans have bemoaned for much of the season: the power play.

Coach Jeff Pyle's power play was a revelation in Texas early. The Stars were clicking along at 30% in the first few months of the season, eventually cooling down to 19.0% currently with 61 goals, ranking 9th in the league. Pyle was renowned for his power play ability in Gwinnett. It is clear that he has a knack for the man-up situation, but a combination of depleted player base and the league learning his tricks depressed that number as the season wore on.

Second, I think several players had breakout seasons. Matt Fraser is the most obvious with eye-popping numbers. Fraser has 36 goals on the season, leading the AHL as a rookie. He needs to work on his defensive game, but it's a great start.

The entire line of Colton Sceviour, Francis Wathier and Scott Glennie put together a great back-half of the season. As I documented here, I believe Sceviour has earned a spot in the NHL with his play this season. Many of the same arguments could be made for Francis Wathier, but he has age working against him. Scott Glennie has added physicality to his skill set thanks to being paired with the two through the season.

Finally, the early indications of the ATO signee play have all been good. That is something to build on. The biggest question that remains is what changes around them. Regarding that, Texas Stars president Rick McLaughlin was recently quoted, "We look forward to seeing the new crop of Texas Stars players to help turn things around in 2012-13."

Discussions about whom are ones we will surely have here and on 100degreehockey.com as the months wear on.