Around the League: Idaho Steelheads Not Satisfied With Mediocrity 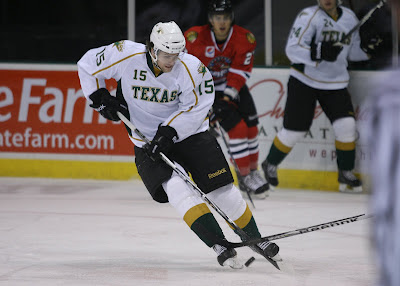 Michael Neal played the entire 2011-12 season in Idaho, which made the playoffs but had its first losing season in team history, including a ten-game losing streak. (Credit: Texas Stars)

We're getting closer to the summer doldrums, so it's time to pull out the old "Around the League" features and dust off the cobwebs. Throughout the summer, I'll compile stories I find and try to post them on a regular basis, something like Puck Daddy's "Puck Headlines" or Defending Big D's "Daily Links", but with more commentary. Here we go...

Despite making it to the second round of the playoffs, the Idaho Steelheads announced yesterday that they would not be renewing the contract of head coach and general manager Hardy Sauter. Sauter came in two years ago after two years as the head coach of the WHL's Spokane Chiefs. Amazingly, up until that year, the Steelheads had never won fewer than 40 games in a season. Under Sauter's leadership, they won 32 and 31, earning their first sub-.500 record in the team's nine-year history.

This is a very interesting "firing" for the system. Idaho has been a destination franchise for players over the years because of how well they are treating and the winning environment. Fans have become accustomed to it over the years. Brian Murphy of the Idaho Statesman points out, "[Sauter] was booed by fans during games this season, particularly as the Steelheads endured a 10-game losing streak in February and March."

This is a positive sign for Idaho continuing their reign as a top ECHL franchise. They are not satisfied with mediocrity or happy with "just making the post-season". Each and every year is a run for the Kelly Cup for this franchise and the Texas Stars should be happy to have them as their affiliate. Now if Dallas/Texas could just start sending more prospects their way this season...

Elsewhere:
analysis around the league awards