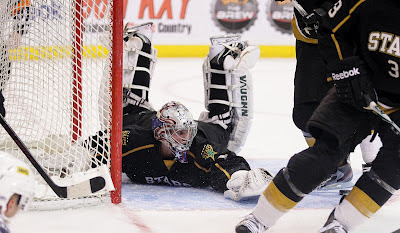 The hockey world and the Dallas Stars press wire are buzzing this morning with a few different stories.

First of all, last night Dallas announced the schedule and roster for Stars Development Camp. Camp will be held next week, July 5-12 in Frisco, Texas. The full roster, which can be found here, comprises 40 players, including nine goalies. It would seem unusual to have that many until you notice the note at the bottom of the roster indicating that media availability with Jack Campbell, Christopher Nihlstorp and Tyler Beskorowany must be specially requested. To me, this means they will be off doing some special activities with goalie coach Mike Valley. I plan to attend development camp and talk with some of the newest Stars.

Second, Mike Heika broke news yesterday that, as expected, the Stars bought out Eric Godard's contract. Godard was brought on as an experiment as the team "tough guy". In the end, he played 0 games in the NHL last year and was often a healthy scratch with Texas. He tallied one goal and 58 penalty minutes in 46 games played. Godard's contract switched over to one-way next season, and the Stars were not anticipating him making the NHL roster or being a useful piece at the AHL level.

Texas has a total of six unrestricted free agents from last season's roster. They are:
Only one of those has re-signed, Francis Wathier. On the list of players I don't expect to re-sign, I would include Andrew Raycroft, Ray Sawada, and Dan Spang. Unfortunately, I also do not believe that the Stars are targeting Brad Lukowich. In questions about veteran players and signings with Scott White, Lukowich was not in the conversation. As to veteran D, Texas is targeting Maxime Fortunus. Fortunus's AHL salary was 150,000, making him the highest AHL salary other than Brad Lukowich. That $150k is already pretty high for an AHL salary. I believe Fortunus may test the free agent market on July 1st, just to see what's out there.

On the Texas free agent list still are Nick Layton, Stephen Schultz and Shawn Weller. Schultz is the only one on this list that I would think is a possibility to sign. However, when you look at who's already signed and who is coming from juniors, there isn't a lot of roster room left. Could Schultz be added on an AHL/ECHL two-way to provide depth for the roster? I think that's the most likely way for him to play for the Stars this season.
development camp free agency player contracts