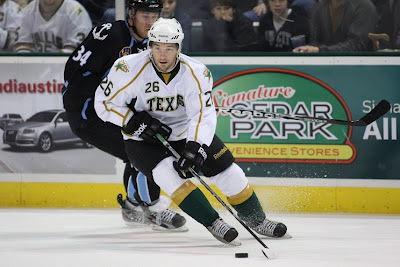 Mike Hedden in an early February game against Milwaukee (Credit: Portraits by Deena)
Hundred Degree Hockey has learned that the Texas Stars have re-signed forward Mike Hedden for the 2012-13 season. Hedden, who is going into his fourth professional year, was signed to an AHL contract by Texas.

Hedden surprised many as he collected 34 points last season, bouncing from the first line to fourth line throughout the season and producing at every turn. The Neumann College product is looking to build on that first season, as Texas Stars GM Scott White alluded to.

"Mike is an AHL contracted guy who had a good year last year. And now the goal is to follow up that year with another good year on a team that has overall better results."

White felt that signing Hedden as a veteran player was an important part of the puzzle for Texas.

Along with the signing of Francis Wathier, Texas is working to solidify a veteran core to support the numerous first-year pros on the team, many of whom joined the team for amateur tryout stints this past spring.

White led me to believe that the team is still working on several veteran signings. Most of the staff's time for the next week or so will be consumed by the NHL Draft, taking place next weekend in Pittsburgh next weekend.