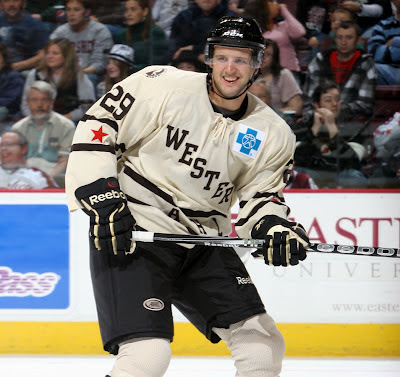 Big news in the free agent market today for Texas Stars fans as Dallas announced the re-signing of Francis Wathier to a two-year deal. The club locks up a veteran forward with the signing and ensures some forward stability for the young club.

Wathier is coming off a career year in terms of assists and points. He also gets a lot of credit for the growth of the game of Scott Glennie this past season while being grouped with him on a line with Colton Sceviour. With Texas's veteran situation up in the air due to free agents Brad Lukowich and Maxime Fortunus possibly leaving, this is a great signing to ensure that there will be another experienced voice for the forwards in the room.

If Brad Lukowich does not re-sign, I would not put it out of the realm of possibility that Wathier earns the captaincy of the Texas Stars.

The Dallas Stars announced today that the club has signed forward Francis Wathier (wa-tee-ayh) to a two-year, two-way contract, for the 2012-13 and 2013-14 seasons.

The 6-foot-4, 225-pound forward skated in 75 games for the Texas Stars (AHL) in 2011-12, earning 18 goals, 24 assists and 42 points, with 94 penalty minutes. His assist and point totals were both career bests at the AHL level, and among Texas team leaders, he placed fourth in goals, assists, points and PIM.

The native of St. Isidore, Ont., skated in one game for Dallas last season, going scoreless. He has appeared in nine career NHL games with the Stars, recording five penalty minutes and making his NHL debut on Oct. 22, 2009.

Wathier, 27, was Dallas’ sixth-round selection (185th overall) in the 2003 NHL Entry Draft. He was a part of the Idaho Steelheads ECHL Kelly Cup championship club in 2007, and as a member of the Iowa Stars in 2007-08, was named Iowa’s American Specialty Man of the Year for his outstanding contributions to the Des Moines community.