Posted by Stephen Meserve on September 19, 2012 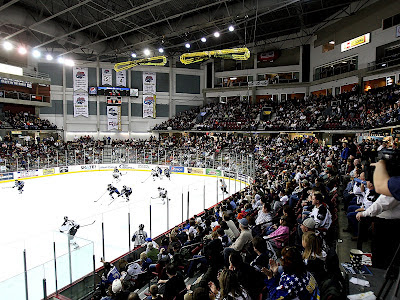 UPDATE: The NHL has now officially cancelled all preseason games through September 30th, including both games mentioned in this article.

As the 2005 NHL Collective Bargaining Agreement expired over the weekend and the NHL locked out their players, hopes of NHL hockey in Boise, Idaho, and San Antonio, Texas died a quiet death. Both cities were scheduled to host Dallas Stars preseason games in the next ten days.

"As of Tuesday night, the [Idaho] game has not been cancelled, but it seems inevitable," said Will Hoenike, Director of Media and Community Relations for the Steelheads.

The Stars' September 25th tilt against the newly-retooled Minnesota Wild at CenturyLink Arena in Boise was set to be the crown jewel of Dallas's training camp stay in Idaho. This was scheduled to be the Stars' first trip to the Gem State, after visiting Charlottetown, Prince Edward Island, Canada, for the last two training camps. Dallas has affiliated with Idaho for all but one of Steelheads' years in the ECHL (2004-05).

As of Monday, the Steelheads had posted contingency plans for ticket refunds to their Facebook page. Links to the box office site to buy tickets for the game had been removed from the web by Tuesday night as well.

The team had already sold 4,300 tickets for the game and sold out all of the arena's suites long ago. Only 700 seats remained for the game, which were expected to sell very quickly once the Stars arrived and buzz for the game reached a fever pitch. With possibly overflow seating, the potential was there for this to be the biggest hockey game in Idaho history.

"Our fans are disappointed about losing this game," said Hoenike. "Kids growing up in Caldwell, Idaho, are not often going to have the chance to stand next to an NHL legend like Jaromir Jagr, but that's what they had here. The fans know it's not the Stars' fault, but it's still disappointing."

Meanwhile, San Antonio's NHL preseason prospects are in similarly dire straits. While there has yet to be a public mention of refund contingency plans from the Rampage, the September 28th game against the Florida Panthers had been removed from Ticketmaster as of yesterday.

The loss of the game is also disappointing to the Rampage. After posting their first playoff series victory in team history last season, the Rampage were on the up-and-up. Thanks to Dale Tallon's cunning draft and player selection strategies, the prospect pool in the Alamo City is getting deeper. The commitment that Tallon had to the Rampage was evident when he was willing to make a trade for Jon Matsumoto last season. The trade, which had no effect on the parent club, was made purely to improve the minor league club. "Runnin' with the Herd" called the trade the most impactful in the history of the team.

Overall, this is just another one of the many impacts of the lockout. The NHL has not officially started cancelling regular season games, but that should be expected in the next week or so. Once again, the fans, and the game overall, are the hardest hit.
dallas stars idaho steelheads preseason training camp