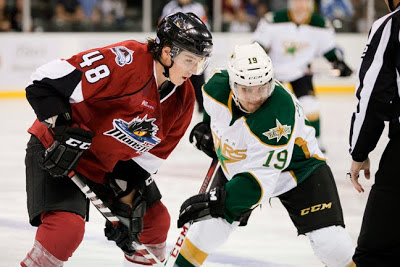 The Stars capped a forgettable weekend with a 4-0 loss to the Lake Erie Monsters on Sunday evening. After back-to-back losses to Houston, Texas is now on a three game losing skid and has a 2-3 mark on the season. "It wasn't the weekend we were hoping for," said captain Maxime Fortunus.

The Stars struggled in transition all night, making passes that were intercepted with regularity. "Our D are feeling pressure and trying a little too hard [to get the puck out]," said Coach Desjardins.

The captain agreed, "Transition was a big key. It's a part of the game we have to get going."

Texas allowed three goals in the second period, as Cristopher Nilstorp took the loss. Jack Campbell started the third in relief and allowed one. The last time Lake Erie visited the CPC, they also had a four goal margin of victory.

The Stars and Monsters played through a quick first period. Thanks to few whistles and no penalties in the frame, the period was done in under thirty minutes. Texas outshot LE 7-4.

Scoring picked up in the second, where the Monsters did most of their damage. Mark Sgarbossa started it early with a goal off a centering feed from Patrick Bordeleau in the second minute. Just 84 seconds later, Bill Thomas would wrist one past Nilstorp from the right wing circle for the 2-0 lead. That goal came as a directly result of Texas failing to take the quick way out of the zone.

"We have to make the easy play out," said Fortunus. "We can't be looking for the play all the way across the ice. Often, your easy play is your best play."

Lake Erie added another before the end of the period on the power play. Brad Malone picked the top-left corner on Nilstorp and set the score at 3-0. The Monsters were 1/1 on the power play, as that was their only opportunity. Texas was better about not going to the box tonight, but that was surely a hollow victory given the score.

Jack Campbell would replace Nilstorp to start the third after the Swede stopped 10 of 13 shots against in 40 minutes of work. Campbell would allow a goal of his own as Bryan Lerg managed to get Campbell to commit to a fake and then roofed one over the splayed tender for the 4-0 lead.

Coach Desjardins has a voice of reason on the losing streak. "It's just three games. When we won five in row, everyone thought we'd go forever."

Back to work on Monday for Texas.

Jordie Benn played forward for a significant portion of the night, but eventually switched back to defense.

Alex Chiasson missed the game, coming down with the flu just before the game.

Coach Desjardins comments on Glennie:
"No [he's not injured]. He's gonna get ready to play and he'll be in the lineup soon. Probably in the next few games."

Tomas Vincour took a puck to the cheek late in the game on some friendly fire. He appeared to have a cut and left the game for the last four minutes.