Texas Stars Bounce Back Against Milwaukee 3-1 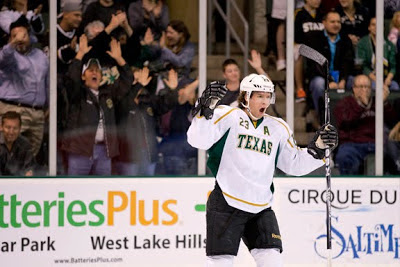 The Stars bounced back from a disappointing weekend with a solid 3-1 effort against the Milwaukee Admirals tonight in Cedar Park. "We learned from our mistakes on Sunday," said Jamie Oleksiak, who had his first pro goal in the game. "We reviewed video with coach and established some goals we needed to do to win."

The Stars got up early thanks to a power play goal from Travis Morin. Texas played tight hockey, typical of the Stars-Ads matches of seasons past, all night. "Tonight's game was a lot more like playoff hockey, smarter hockey, not so much run-and-gun," said Jack Campbell, who stopped 23 of 24 Milwaukee shots.

Texas came out of the gate like a flash, racking up 10 shots on goal before Milwaukee managed their first fifteen minutes in.

"I didn't think I was going to get a shot on the whole game the way they played in the first," said Campbell.

The Stars' shot count was aided by two power plays, one of which was successful. A Francis Wathier pass found Travis Morin on the backdoor, where he rainbowed one in for his second of the season. Jordie Benn had the second assist.

The remainder of the first and into the second continued to be a rough grinding game, reminiscent of the 2011 playoff series. Francis Wathier had another great play at the end of the first, checking Milwaukee captain Mike Moore and leaving him a bit stunned. It was prototypical of the entire night.

"Being a physical presence [was one of our goals]," said Oleksiak. "It was a big reason we got chances and opened up the ice."

Scoring resumed in the third period with Jamie Oleksiak's first professional goal. The Admirals were playing aggressively all night, allowing a 3-on-1 for Texas. Cody Eakin dropped the puck to Oleksiak, who slid one in past Jeremy Smith for the 2-0 lead.

"I almost broke my stick calling for the puck from Eakin."

Milwaukee broke up the shutout bid with 4:27 left in the third, scoring on a point shot that found twine. Antoine Roussel would go on to seal the deal with his first goal as a Star. Mike Hedden had a nifty play along the left wing boards to get the puck to Roussel and make it 3-1.

The Stars now have a long layoff until their next home game, broken up by a single game in Oklahoma City on Sunday. Special teams work, which the team concentrated on in practices so far this week, should continue, as it clearly helped.

Alex Chiasson was out with the flu again.

Scott Glennie out again for the sixth game. Glennie was projected to play tonight by both Coach Desjardins and Les Jackson. Desjardins on Glennie: "he's going to be coming back here real quick." No further comment given.