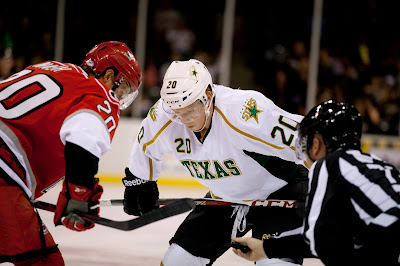 Cody Eakin squares up for a faceoff in tonight's game. (Credit: Texas Stars)

Texas needed more than the standard sixty to do it but managed to set their home opener record at 4-0 with a 4-3 shootout victory over the Charlotte Checkers tonight in Cedar Park. The Stars were down 3-1 in the third period after two power play goals from the Checkers but clawed back with two in the period. "We traded chances and there were ups and downs," said Stars forward Cody Eakin, who had two goals in the game. "We just didn't give up."

"Eakin played well," said Coach Desjardins. "It's one thing to play well when you're fresh, but he was tired on a lot of his shifts. He was great."

Jack Campbell was similarly excellent, keeping the Stars in it during the overtime period and stopping eight of nine in the shootout. "He's a money goaltender," added Desjardins.

Texas seemingly had all the momentum in the first period, getting two late power plays and seemingly doing everything right except put the puck in the net. That momentum went away in the second when a whiffed pass by Jordie Benn allowed Zach Boychuk to break in alone for the 1-0 lead. Cody Eakin would even things up before the end of the second with his first goal as a Star. Reilly Smith and Tomas Vincour deserve a lot of credit for the play, dishing the puck to Eakin, who was alone in front. "It was pretty easy [to play with Vincour and Smith]," said Eakin. "We found chemistry early."

"We had a really good second, putting up a lot of shots," added Desjardins.

The wheels came off a bit in the third as a series of penalties put Texas on the PK repeatedly. Riley Nash squeaked one past Campbell at 1:43 of the third. It looked like the Texas tender had the puck sealed up but the referee's vehement gesticulating told the true story. Bobby Sanguenetti added a third for the Checkers just two minutes later, again on the power play.

Down 3-1, Texas drew a brief 5-on-3 power play, allowing Cam Barker to score his first as a Star, booming one from the point to beat Dan Ellis clean. Texas completed the comeback on the penalty kill as Cody Eakin again found twine, this time shorthanded, beating Ellis on a wrister from the left wing circle.

"This group of guys is young and hungry and can skate," said Eakin. "We don't quit and we're relentless. We make teams turn it over in the third, because we pressure them and wear them down."

The Stars took things to overtime and Jack Campbell absorbed four shots to Texas's zero, taking the game to a shootout. Nine rounds were needed to decide the matter with Texas putting up Eakin, Matt Fraser, Tomas Vincour, Mike Hedden, Reilly Smith, Francis Wathier, Taylor Vause, Travis Morin and Jordie Benn. Fraser scored but the score was immediately tied with a tally by Jerome Samson. Jordie Benn found the net in the ninth round and Jack Campbell stopped Sanguenetti with a flourish to set Texas's record at 2-0. The only other time Texas started the season 2-0 was 2010-11.

Coach Desjardins on scratching Austin Smith and Scott Glennie this evening: "It's nothing really. Both guys are ready, they can play and they will play. When you win and you have a guy in the lineup, you tend to come back to him."