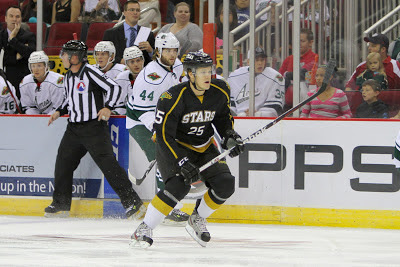 Last season, the Texas Stars scored 224 goals. One in six came off the stick of then-rookie Matt Fraser, whose line with Travis Morin and rotating partners including Ray Sawada and Mike Hedden was an offensive powerhouse throughout the season. After being outscored 14-4 in the weekend three-in-three, the question has to be asked: where is that offense this season? The league has obviously noticed Fraser's scoring prowess. Is he a 'marked man'?

"I don't think I'll be able to comment [on being a marked man]," said Fraser before the season. "The challenge is there. The good NHL players find a way to put the puck in the net whether they're a marked guy or not. That's obviously the end goal."

Fraser and Morin have been paired up again and often with Mike Hedden in the early going of the season. The lineup seems obvious. Hedden is a grinder who can score and skate as well. Morin is an effective distributor of the puck, and Fraser has a solid shot that he used to great effect last season. However, Fraser and Morin, when combined with Sawada in the early going had one of the worst plus-minuses of the team.

Fraser was all too aware of the challenge of being defensively responsible: "The plus-minus was an area I'd like to improve on. To be a consistent player in the NHL, you have to be as good defensively as you are offensively. I know a lot of people take stock in that, and there's no one harder on myself than me on that stuff."

So far this season, Fraser has been held to zero points in five games. To this point last season, he was 4-2-6 with a minus-1 rating. This season he has a minus-3 rating, all accumulated this past weekend.

Unfortunately, the AHL does not publish statistics regarding ice time. If they did, it would be interesting to see if Fraser's ice time has dipped due to the lockout pushing Vincour and Eakin to the AHL. The lineup of Vincour-Eakin-R. Smith has supplanted the Morin-Fraser group on the 'top line', meaning that more premium minutes go in their direction.

Perhaps we can consult a proxy for the data. To this point in the 2011-2 season, Fraser had 27 shots and Morin had 19. Through the first five games of this season, Fraser has just 13 shots and was held without a shot on net in the Lake Erie game. Travis Morin has 14 shots on net, aided by a six shot night against Charlotte.

There is no question that Cody Eakin and Tomas Vincour give Texas a chance to score every time they go over the boards. However, their addition means that Fraser and Morin have to work that much harder to make the ice time that they do have available count on the scoresheet.
analysis