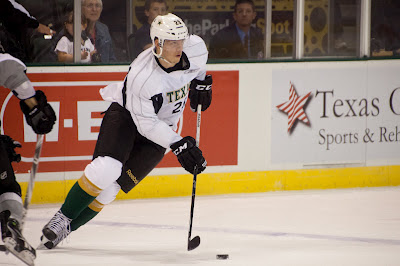 A solid Texas power play and stout goaltending again led to a win for the Stars tonight in Cedar Park. Texas scored two power play goals on eight opportunities. "We had a number of power play advantages and that helps," said Coach Willie Desjardins. "I think we are skating pretty hard and maybe that is drawing [penalties]."

Texas had goals from Tomas Vincour and Brenden Dillon on the power play. Francis Wathier and Alex Chiasson chipped in even-strength tallies in between. Cristopher Nilstorp picked up his first North American win in his first game. The tender stopped 18 of 19 shots against.

"It was fun to play; I've not played in half a year now," said Nilstorp postgame. "The angles are a big difference. I've been here for a month now and trying to get used to it."

Texas opened the scoring in the first period with a power play goal. After being ineffective on the first two power play chances they were granted, the third was the charm. A net mouth scramble saw Dov Grumet-Morris stop several point blank chances before Tomas Vincour knocked the puck into the net out of midair.

The Stars finished the period with eight shots to San Antonio's five.

Texas's offense picked up in the second period with a three goal outburst. Veterans Toby Petersen and Francis Wathier combined for the first of the period. Wathier whipped the puck past Dov Grumet-Morris after a bright drop pass from Toby Petersen at the right point.

Not to be outdone, Alex Chiasson picked up his second of the preseason on another smart play from Taylor Vause, who had a very good night. Vause and Chiasson broke in to the zone two-on-one. Vause sent a pass in Chiasson's direction, which he managed to deflect into the net for the 3-0 score. Tyler Sloan had the second assist.

"Chaisson is a big strong forward, heavy body to move," said Desjardins. "And he's got a great attitude."

The final goal of the period came on the power play as Brenden Dillon bombed one past DGM clean from the right point. Petersen, also playing the point, slid the puck over the Dillon for the primary assist, and Morin had the secondary on the 4-0 goal.

Goalie Nilstorp came on strong at the end of the second. Coach Desjardins noted, "He had a few chances [against] late in the second period that could have turned it, but he was solid."

Texas would finally give one up in the third frame on the power play. Francis Wathier took a questionable goaltender interference call, and Drew Shore found twine from the high slot on the ensuing man advantage.

Taylor Vause had a sneaky good night. I think his assist was a great play, but he played very well overall. He is making a solid case to stay.

Toby Petersen left the game in the third period after taking a hit in the offensive zone. He did not return. Coach Desjardins had no comment on his condition after the game.