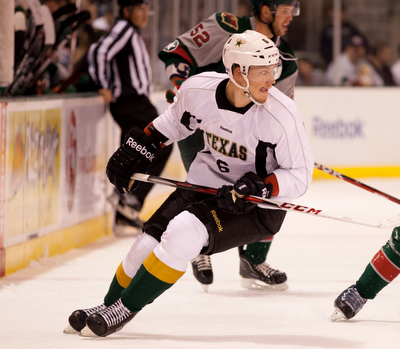 Texas's power play contributed four of a total seven goals on the night to overwhelm the Houston Aeros in preseason action by a final of 7-2. First star of the game, Francis Wathier, had two goals and two assists on the night. "We tried to move the puck a lot," said Wathier. "We're trying something different and it's working." Jack Campbell played the entire game and stopped 22 of 24 shots against.

"There were a lot of good things," said Coach Desjardins. "We were lucky on the power play and that was the difference in the game." Jokingly, he added that the power play was working because "we haven't had time to screw it up yet."

Texas also had success as they were able to roll four lines. "Clubs are going to be a little deeper [this season]," said assistant coach Doug Lidster. "So you're going to need your fourth liners to eat up minutes."

In a first period with 26 minutes of penalties between the teams, Texas was the one that managed to capitalize on the opportunities. The club went 2/5 on the PP in the first. Colton Sceviour opened the scoring with a nice wrist shot from the left wing circle, assisted by Jordie Benn and Travis Morin. Houston answered back halfway through the period with a two-on-one goal finished off by veteran Aero Carson McMillan.

The Stars continued their power play mastery with another goal from Francis Wathier in the 12th minute of the period. A nice shot from the point man, Toby Petersen, was tipped up and over Darcy Kuemper to make it a 2-1 game. Jordie Benn picked up his second assist of the night on the play.

The power play picked up right where it left off in the second as a 5-on-3 led to an easy tap-in goal by Mike Hedden on the back door. Morin and Wathier assisted on the play. The third period is where things got pretty out of hand for the Aeros as Texas extended their success to even-strength.

Tomas Vincour opened that third period scoring with a great backdoor tap-in. Maxime Fortunus kept the puck in the zone at the left point to keep the play alive. Francis Wathier potted his second of the night just two minutes later, with a Chiasson shot-pass deflecting in off his skate.

Cody Eakin scored his first goal as a Star just a minute later, finishing off a rebound on an opportunity where Fortunus recovered an errant Houston pass and took a shot. Brenden Dillon finished off the scoring in the game with a power play goal, Texas's fourth of the game, assisted by Wathier and Chiasson.

Austin Smith had the first fight of the preseason, throwing down with Ryley Grantham in a short-lived bout at the end of the first period. Smith had just jumped over a player, clipping his head and drawing the ire of Grantham, who picked up an extra minor.

Colton Sceviour left the game after blocking a shot in the first period. He did not return, and Coach Desjardins does not expect him to be 'out for a while'. Early indications point to a broken hand.

Jace Coyle dressed for the game but did not play until the third period. Defense coach Doug Lidster indicated that this was an agreement between the teams to allow the dressing of an extra player. "Dressing an extra player puts a lot of stress on the team since you grow up used to six. Jace did a real good job with his ice time in the third."