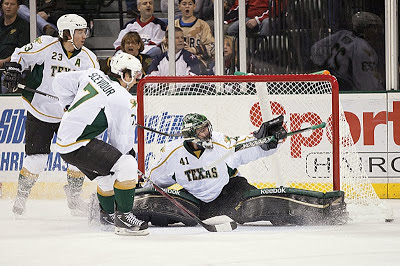 Nilstorp stops one of his 21 shots against this evening in Cedar Park. (Credit: Texas Stars)

Three goals from Texas and a clean sheet from Cristopher Nilstorp earned the Stars two points at home tonight against the San Antonio Rampage. "We finally got a win at home, which is nice," said Coach Desjardins. The shutout performance from Nilstorp was his first AHL shutout.

"It feels better and better. When you win, you grow more confident," said Nilstorp. "I could see the puck all the way tonight, and the guys helped me with the rebounds."

Matt Fraser had two of the Texas goals, including one on the power play. Texas generated two of their three goals off turnovers. "We have to be a team that's hard on the puck. We get guys in the corners mucking it up, [generating turnovers]," said Fraser.

Special teams were the story of the night, however. The Stars blanked the Rampage on six PKs and scored on one of their three power play chances. "It was easy to improve; we had some really bad numbers," said Desjardins. "Every night it's getting better."

Luke Gazdic and Eric Selleck kicked off the thirty-sixth matchup between the two clubs with a fight just three minutes into the first period. The Stars killed a Patrik Nemeth tripping penalty with facility and then a double minor to Reilly Smith that stretched over the period break. Cody Eakin picked up a high-sticking call of his own forechecking behind the Rampage net, giving the Rampage a minute of 5-on-3 time.

Texas killed all of the power play time and earned one of their own thanks to a Jon Rheault slashing penalty. On the ensuing power play, it was Matt Fraser picking up his fourth of year. On a net mouth scramble, Fraser popped the puck in between Markstrom's legs, a slow dribbler that crossed the line in no hurry.

Eight minutes later, Fraser picked up another thanks to a big play by Colton Sceviour. Sceviour upended Andre Deveaux in the Rampage zone to generate the chance. He passed the puck down to Cody Eakin who skated behind the net and distributed it to Fraser in the slot, who snapped it past Markstrom's right shoulder. It was Fraser's fifth of the year.

Another Rampage turnover generated the Stars third goal of the night. Francis Wathier on the forecheck stole a puck from the San Antonio defense. He fed it to Roussel and then to Scott Glennie in the slot. Glennie whipped it on net, five hole again, past Markstrom for the 3-0 lead.

Texas locked it down in the third period and kept the score at 3-0, despite two power plays for each team.

"The PK guys have been doing a great job," said Fraser, who does not play on the penalty kill. "It takes a lot of cajones for guys to go out there and step in front of a shot."

Texas takes on the Charlotte Checkers on Saturday, a powerful team that will serve as a great measuring stick for the club's recent success.

The Stars scratched Jack Campbell in favor of Josh Robinson in the backup role. "Robinson's been playing real well," siad Desjardins. "We thought we'd pull him up and give him a look." He was unsure if Robinson would get a start, saying "Nilstorp is playing well so he'll probably get a little more."

Austin Smith was also pulled up from Idaho but has yet to play in a game. Desjardins had the following to say on that matter: "We have a few guys up who aren't in the lineup. It's hard to bring someone in and sit the guys that have been with you all year. Austin looks better and is getting his confidence. The other guys will probably get a chance first though."