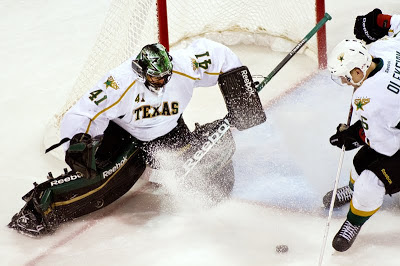 Something about the Charlotte Checkers brings out the best in the Texas Stars. The number two team in the Western Conference came to town for a second time this evening and again left with a shootout loss courtesy of the Stars.

"That's a great team," said Toby Petersen, who scored the game winner in the ninth round of the shootout. "We definitely bring our game up against them."

Cristopher Nilstorp again had a perfect record, stopping all twenty-two shots he faced in regulation and overtime. Dan Ellis was equally stellar before the shootout, stopping 31 Texas shots. "Nilstorp's been fantastic for us. It's nice to know if we make a mistake, he'll be back there to bail us out."

Texas opened the game with an early PP chance in which Matt Fraser banged one off the post, one of the best chances of the night. Then Texas ceded three power play opportunities to Charlotte through the rest of the period. The #1 ranked power play in the league was shutdown by patient penalty killers and the steady hand of Cristopher Nilstorp in net.

"We've done a better job [on the penalty kill]," said Petersen. "We've cleaned some things up."

"I think there's more confidence in the [penalty killers] and we trust each other more," added Nilstorp.

In Coach Desjardins' opinion, the second period was "the best period we've played all year." The Stars outshot Charlotte 13-3, took no penalties (but also earned none themselves), and still came up scoreless at the end. It was a solid goalie duel.

The Stars killed off one final penalty in the third period and had another great chance from Antoine Roussel as time wound down. Overtime saw Charlotte outshoot Texas 3-1 but no scoring.

For the second time in as many games between the two teams, Texas went to the shootout with Charlotte. Reilly Smith had a great chance to score in the first round but knicked his backhand off the crossbar over a sprawled Ellis. Jerome Samson scored for Charlotte in the second round, but Matt Fraser brought the crowd to its feet in the fourth with the tying marker. Rounds six, seven and eight passed without a goal from either side. Finally, round nine would end it.

"I went in with the idea just to shoot it," said Petersen. "The ice was bad out there. My idea was to go in there and shoot and try to get lucky."

And get lucky he did, beating Ellis five hole for the win.

"It's ironic that the day we're supposed to score to get the teddy bears on the ice, we couldn't get it done in regulation."

With the win, Texas stretched its points streak to four games and win streak to three. Cristopher Nilstorp now has back-to-back shutouts and a streak of 153:09 overall. He is the undisputed #1 in net for Texas right now.

Eakin missed the second and third period after blocking a shot in the first. He went for xrays, but they came back clear. He was in a precautionary walking boot after the game.

Jordie Benn was scratched tonight but not injured. He was cleared to play tonight, but Texas decided to hold him out just one more game.