Stars Bounce Back 5-3 in San Antonio 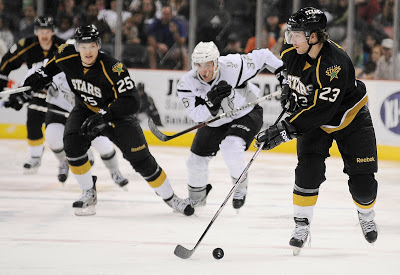 After two disappointing losses, the Stars bounced back with a 5-3 win over the Rampage this afternoon in San Antonio. Travis Morin, Matt Fraser and Francis Wathier each had two points, but it was Colton Sceviour with the game winning goal. The Stars scored two goals twenty-seven seconds in the middle frame and then answered back to a Rampage goal just forty six seconds later. Texas was 1/4 on the power play and perfect on the two penalty kills they had.

Jon Rheault opened the scoring for San Antonio in the eighth minute of the first period. The goal was a rather odd one, popping up over Cristopher Nilstorp and rolling down his back and into the net.

The Stars would counter seven minutes later as Travis Morin collected a great feed from Jamie Oleksiak and backhanded one past Dov Grumet-Morris. The assist was Oleksiak's sixth of the year, showing the continuing maturation of his hockey vision. The Rampage and Stars were even on shots in the first at nine each.

Texas dominated the second period after San Antonio's second goal. Drew Shore scored from the faceoff dot seven minutes in to make it 2-1, but Texas roared back. On the power play, Matt Fraser scored his sixth of the year to tie it at two. The play was assisted by Wathier and Morin. Just 27 seconds later, Wathier again dished off the puck, this time to Brenden Dillon, who scored his first of the year. The Stars led 3-2 to close the second.

Jack Campbell would start the third period despite Nilstorp finishing the second. Nilstorp did not return to the Stars bench. Campbell was tested early and eventually San Antonio broke the seal. Drew Shore picked up his second of the night on an ugly rebound tally. Jon Rheault assisted on the tally for his third point of the night.

Forty six seconds later, the Stars answered back. Matt Fraser shot the puck in from the corner. Colton Sceviour tipped the puck top shelf over Grumet-Morris for the 4-3 lead. Patrik Nemeth picked up the secondary assist, his first AHL point.

Shots in the period were 14-8 and continued ramping up as the period wore on. Texas got the last laugh though as Scott Glennie sealed things with a 2-on-1 empty net goal. His second of the season locked the game down at 5-3. Reilly Smith assisted.

Texas reaches .500 with the win and will now travel to Rockford for their first of the season against the IceHogs.

No word on Nilstorp at the end of the game.