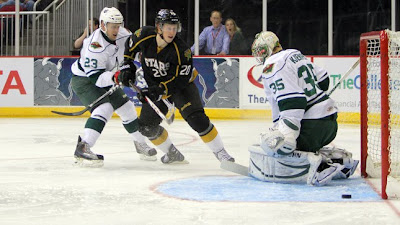 Cody Eakin slipped around Kampfer and poked the puck past Kuemper for the 1-0 marker early in the game. (Credit: Morris Molina – Houston Aeros)

The Stars earned two points in Houston thanks to solid goaltending, improved special teams and goals from their goal scorers. This was exactly the kind of game that the Stars needed to vault themselves into a good position with a few days off ahead of them. Goals from Cody Eakin, Tomas Vincour, Travis Morin and Antoine Roussel combined with 26 saves on 28 shots at Cristopher Nilstorp. The penalty kill went 5/6 and a power play goal helped pad the score.

The Stars got started early tonight, scoring first for the first time since their October 24th win over Milwaukee. The Aeros were guilty of a too many men penalty, which send Texas to a quick power play. Cam Barker found Cody Eakin with a long breakout pass and Eakin beat Darcy Kuemper low through the wickets for the 1-0 lead. Cristopher Nilstorp picked up his first AHL point with the second assist on the play.

Tomas Vincour notched his third of the year just six minutes later. At even-strength, Vincour picked a corner on Kuemper from distance and set the score at 2-0. Reilly Smith and Brenden Dillon assisted on the play.

Houston got one back on the power play just three minutes later. With Dillon in the box, Kris Foucault popped the puck over splayed bodies in the crease to cut the lead to 2-1 for the Stars.

Travis Morin went next though, regaining the Stars' two goal lead thanks to some fortuitous bounces. Darcy Kuemper watched the puck bounce off his helmet and onto the stick of Morin, who buried it for his third of the year and a 3-1 lead. The Stars finished the period with a 12-8 shots advantage.

The second period was relatively quiet, compared to the penalty and goal filled first. Jason Zucker had the only tally of the period as he tapped in his own rebound past Nilstorp for the 3-2 marker just short of the twelve minute mark. Houston outshot Texas in the period 9-8.

Ahead as the third period began, Texas extended their lead thanks to the fourth line, always a positive sign. Scott Glennie carried the puck in and down low behind the net. He slid it out front off the side of the net, and Antoine Roussel managed to find it and slam it home for the 4-2 lead. The goal was Roussel's second of the year. The scorers did not award any assists on the play.

Texas closed out the game with some solid special teams play, killing off a Wathier interference call and a Fraser delay of game call in the third.