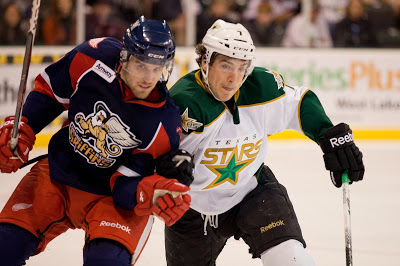 Colton Sceviour returned from injury and contributed a goal in the losing effort. (Credit: Texas Stars)

Unable to watch last night's game, so I've got limited visibility to this one.

At some point, this young team will gel, but it wasn't Saturday night against Grand Rapids. The bottom-ranked Griffins beat the Stars by three at the Cedar Park Center on Saturday.

It seemed like some uncharacteristic things happened in the game. Toby Petersen, Brenden Dillon and Taylor Vause, all usually strong defensively, were minus-2 each in the game. On the positive side, the Morin-Sceviour-Fraser line was plus-1 in a 3 goal loss. That's bucking a trend for #23 and #25. It's a sign of growth.

The Stars went 0/7 on power play chances and things don't get any easier from here. Texas plays Toronto, the odds on favorite in their division, on Friday.

Texas outshot the Griffins 15-7 in the opening frame, but found themselves trailing 2-1 after a penalty filled first period. Defenseman Adam Almquist put the Griffins up 1-0 when he beat Stars goaltender Jack Campbell with a wrister from the right wing at 3:08. Texas killed two Grand Rapids power plays to regain momentum and then evened the score at 1-1 on a Colton Sceviour breakaway goal at 13:48. Sceviour fired a wrist shot past the glove of Griffins netminder Petr Mrazek to tally his first goal of the year in his regular season debut for the Stars; Sceviour had suffered an injury during the Stars’ first preseason game. Grand Rapids retook control less than two minutes later as Joakim Andersson’s off-target shot redirected off the skate of a Texas defender and into the net.

Early in the middle period Almquist scored his second goal of the contest, on the power play, with a slap shot from the point at 2:43 to put Grand Rapids in front 3-1. The Stars had multiple chances to narrow the gap during two power play opportunities, but Mrazek remained solid between the pipes as he stopped all nine shots he faced during the session. Texas headed to the locker room trailing by two goals despite finishing the period with a 24-18 shots on goal advantage.

The third period started with a bang as Luke Gazdic sparked the Stars bench and the 5,904 fans in attendance when he exchanged blows with Griffins winger Triston Grant, the game’s only fight. However, Grand Rapids extinguished any hope for a Texas comeback when Gustav Nyquist capped off the scoring with a one-timer from Tomas Tatar at 16:00.

Grand Rapids goaltender Petr Mrazek earned his first win of the season, stopping 29-of-30 shots, while Texas starter Jack Campbell took the loss while making 23 saves on 27 shots. The Stars out-shot the Griffins 30-27 and went 0-for-7 on the power play, while Grand Rapids was 1-for-6 on the man-advantage.

Glennie and Sceviour both played their first games of the season.