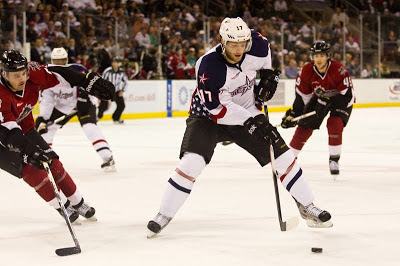 Tomas Vincour re-joined his usual linemates and had a goal and an assist on the night. (Credit: Texas Stars)

Texas finally started to get some bounces, coming back from down 4-2 to tie the game in the final second of regulation before falling in the shootout to the Lake Erie Monsters.

"For us, it was great to get the one point," said Coach Desjardins. "Another half a second later, we wouldn't have gotten any."

The Stars never led in the game but came back each time to tie up the score. Matt Fraser had two goals on the night, including the game-tying tally as time expired. "On the last play it was just a lucky play behind the net. It was good to get a bounce there," said Fraser.

The penalty kill was much improved, shutting out Lake Erie on four tries, while the power play was 2/7. "We knew as a team it wasn't up to par," said Fraser. "Credit to the penalty kill guys, sacrificing their bodies out there."

Lake Erie struck first in the opening frame as Luke Walker slipped behind the Texas defense and wristed one past Jack Campbell. Texas responded well with solid play and earned several power plays, eventually cashing in on a 5-on-3. Matt Fraser potted his second of the year on a nice rebound.

"Every game you want to start quick but we responded well after they scored," said Desjardins. "We could have gotten disheartened but we stayed in it."

Texas ended the first with a 21-4 shots advantage but only a tie score at one a piece.

The clubs traded goals again the second period. Bryan Lerg went first, snapping one past Campbell glove-side for the 2-1 advantage. Tomas Vincour, back again with Reilly Smith and Cody Eakin, grabbed his own rebound off the post and shot it in from the low right wing circle.

The Stars came out for the third period and allowed two Monsters goals six minutes in, taking the air out of the building and sending many for the exits. Mark Sgarbossa went five hole and then just fourteen seconds later Brad Malone danced around Campbell to set the lead at 4-2.

As the disheartened fans poured out while the game wound down, Texas showed them that it was far from over. With the extra man on the ice, Cody Eakin popped home a rebound off an offensive zone faceoff. It was 4-3 with two minutes left.

Time winding down in the third, the Stars had six men on the ice to Lake Erie's four thanks to a late period boarding call. As the clock hit zero, Matt Fraser popped home a paunchy bounce of the end boards to tie things at four. Cam Barker assisted on the goal, his third helper of the night.

The Monsters and Stars went to overtime where Texas outshot Lake Erie 5-2. The Stars' best chance for a goal was a point shot by Fortunus that glanced the post and rebounded harmlessly to the corner. The game instead went to the shootout.

In the skills competition, it was all Lake Erie. Malone, Lerg and Mark Olver scored for the Monsters while only Reilyl Smith managed to find twine for Texas. The Stars, however, will take the point.

Jordie Benn was involved in a scary play at the end of the third. Benn was boarded and then engaged in a fight with Carey. As the fight ended, Benn fell backwards into the boards. While he did not hit his head on the top of the boards, it appeared that he did hit his head on the boards on the way down. Benn got up but had to be helped from the ice. He appeared confused and/or was refusing to leave the game. Texas head coach Willie Desjardins stated Benn would be "out for a little bit".

Coach Desjardins on Cam Barker: "Barks is a good player. He's good on the power play. He wants to win, and sometimes gets caught doing a little too much."

It was unclear at press time, but it is believed that the Stars set a franchise record with the 21 shots in the first.