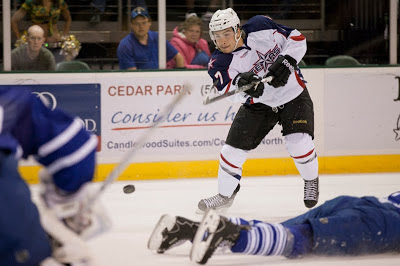 After six days off to rest and prepare, the Stars dropped a 3-0 decision to the visiting Toronto Marlies tonight in Cedar Park. Jussi Rynnas had 31 saves for Toronto in the shutout performance while Leo Komarov had two goals.

Texas has scored just three goals in their last three games and has now been shutout twice on the young season. Goals are hard to come by for the club. "I'm sure our next goal is going to be a garbage goal," said captain Maxime Fortunus. "We have to take our shots."

Coach Desjardins added: "You have to make [the goals] go; you can't just hope. You have to create chances. You get streaks every once in a while in hockey and you have to break them. No one can break them but you."

Also a liability was the penalty kill, which allowed two tonight on four opportunities. The Stars, ranked last in the league in the penalty kill at 66.7% coming into the game, worked on shorthanded opps all week in practice.

The Stars came out of the gate flying. They were playing physically, banging bodies and generally creating havoc on the ice for the Marlies. All indications in the first pointed to a strong game for Texas. However, that tempo dipped as the period wore on.

"We're trying to get to the point where we keep it up shift after shift. We have to keep our tempo," said Fortunus.

Toronto scored late in the first period on a 3-on-2 rush. Kamarov found the net from the low left wing side just as the net came off its moorings. Video replay shown in the building indicated that the net came off before Kamarov had taken the shot, but referee Jamie Koharski did not officially review the play. (Video replay was implemented for the first time in the AHL this year.)

Koharski told Fortunus, "Our player knocked off the net, so he didn't want to review it." Desjardins said: "[Koharski] just said he made the call and he saw it so there was no need to review it."

The second period saw another goal, this time on the Toronto power play. Patrick Nemeth went to the box on a double minor for high sticking. It was a strange play where Jerry D'Amigo ran into Nemeth, but Nemeth got the penalty as he lifted his arms and stick as to D'Amigo's face as he reached him.

On the power play, an unlucky bounce off Fortunus's skate ended up on Kamarov's stick; he cashed in for his second of the night.

The game was capped off with another power play goal from Toronto. Veteran Cam Barker took an undisciplined penalty, checking a Toronto player after an icing call. Ryan Hamilton slipped behind the Texas defense and then around Nilstorp to finish things up at 3-0.

Desjardins liked the number of shots but indicated that the team needs to work harder to win the battles around the net to win.

"Nothing matters from what happened; It's only what's in front of us."

Vincour swapped down the lineup to try and spread out scoring. However, he seemed nearly invisible in the game. He recorded no shots and was otherwise unnotable.