Texas Sends Austin Smith to Idaho; Did His Callup Do Its Job? 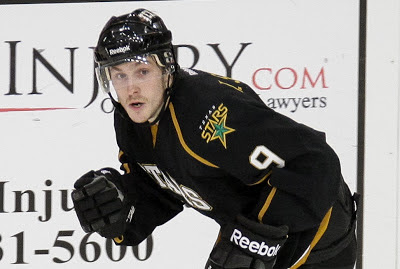 After calling up the Colgate product last week, Texas has returned Austin Smith to the Idaho Steelheads. Smith played in no games while he was in Cedar Park. His arrival last Saturday the 10th, however, marked the turnaround in the Stars fortunes. Smith was involved in each of the warmups for the games while he was here but was ultimately scratched.

The Steelheads just recently had an 11-game unbeaten streak broken up. Smith could probably get to Idaho in time for tomorrow's game against NHLer Scott Gomez and the Alaska Aces in Boise.

At the time, the callup of Smith made great sense. A team struggling to score brought up a player who did just that in the college game. However, without him in the lineup, Texas's offense picked up. Was it a pressure/motivation thing for the skaters already in Cedar Park, seeing a chance for diminished ice time if they didn't contribute? It's possible. Regardless, Smith will look to continue his good fortunes in the ECHL where he has five points in six games.