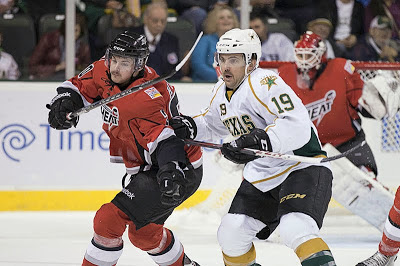 Unable to make tonight's game due to the Thanksgiving holiday. Here's a brief recap of the defensive battle.

Texas only managed 19 shots on goal this game, all turned aside by Danny Taylor, as the Heat prevailed in the overtime period by a 1-0 mark. The Stars and Heat played three scoreless periods before a rebound found the stick of Chris Breen and beat Cristopher Nilstorp blocker side for the 1-0 victory. It was just eight seconds into the OT period.

"It was a bit of a good bounce for them," said Cody Eakin. "I'm proud of how we played."

"We're at home. We have to expect to win that game," added Coach Desjardins. "We battled hard, but they were half a step ahead of us tonight."

The Stars were 0/5 on the power play but went 8/8 on the penalty kill. Coach Desjardins said that Nilstorp is playing with confidence now, which really makes a difference in the team's game overall.

Defenseman Chris Breen scored the only goal of the game eight seconds into overtime as the Abbotsford Head edged the Texas Stars 1-0 Friday night at Cedar Park Center.

The first period was a scoreless affair. Abbotsford had all the power play time, but failed to capitalize and the closest Texas came to scoring was when a Travis Morin shot rang off the left post.

In the middle frame it was the Heat’s turn to rattle the frame as they hit the right post and the crossbar, but failed to beat Stars goalie Cristopher Nilstorp.

The third period was more of the same as both teams had plenty of power play opportunities, but it was the two penalty kill units and the two goaltenders that prevailed.

After such a long scoreless game, the ending was surprisingly abrupt. A mere eight seconds into overtime Sven Baertschi raced in and had his shot denied. The rebound came back out to the high slot and defenseman Chris Breen fired a shot past the blocker of Nilstorp to win the game in the sudden death period.

Abbotsford goalie Danny Taylor stopped all 19 shots he faced to record his second shutout of the season and was named the game’s first star. Cristopher Nilstorp had a strong night, making 28 saves on 29 shots and picked up third star honors in the losing effort for Texas. The Heat out-shot the Stars 29-19 and went 0-for-8 on the power play; Texas was 0-for-5 with the man-advantage.