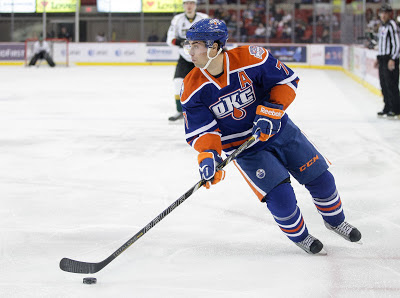 The difference in the Stars game tonight was all in 2:43 of the first period. After the Stars led the shots in the early going, NHL All-Star Jordan Eberle potted three straight against the Stars to mark a natural hat trick in just 2:43 and set the score at 3-0. While Texas would score two in the game themselves, the damage was done in the first period with the exact thing that the Stars didn't want to happen: an OKC scoring outburst.

Jordan Eberle's four-point game started in the fifteenth minute of the first as Taylor Hall assisted on two goals by the winger just nine seconds apart. Texas actually controlled the early action, but the Barons took over all the momentum with the two goals.

Later in the first, Antoine Roussel took a slashing call and went to the box. The number one power play in the AHL wasted no time as Eberle scored six seconds into the penalty with assists from Justin Schultz and Mark Arcobello.

Cristopher Nilstorp would return to the net for the second period despite allowing three goals on seven shots in the first. Colton Sceviour scored his ninth of the year in the period off a rebound from a Fortunus shot. Travis Morin collected the second assist.

Justin Schultz regained the Barons' three goal lead with his seventeenth of the year on the power play just two minutes later. Jordan Eberle and Taylor Hall assisted on the goal, their fourth and third points of the night, respectively. Texas put 21 shots on Yann Danis in the middle frame, tying a season high.

Texas carried over some power play time to the third where Matt Fraser did some damage. A one-timer off the pass of Morin gave Fraser his 12th of the season. In the end, it wasn't enough as the Stars ceded an empty net goal in the fying seconds of the game to fall by a 5-2 final. Barons captain Josh Green had the tally.

With the loss, the Stars are passed by the Barons and drop to seventh in the conference.

Texas will play again on Friday at Houston. The game will start a three-in-three weekend for the Stars that will see them play Peoria on Saturday and welcome Houston on Sunday.