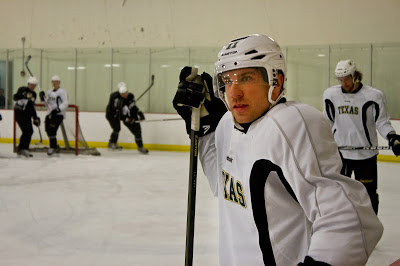 Today in practice Alex Chiasson showed no ill signs of a blocked shot that took him out of Saturday's game late in the third period. The rookie forward appeared to be a full participant in today's practice. Injury to Chiasson would have likely necessitated a callup from ECHL, either Austin Smith or Mathieu Tousignant. Scott White indicated that any potential callup would obviously hinge on the type of player needed to fill the gap.

Also, in Dallas Stars news, Derek Roy is practicing with Texas this week while rehabbing his shoulder. Roy played much of last season in Buffalo with a loose shoulder socket, which often popped out during games. Roy would simply pop the shoulder back in and continue playing. Dallas insisted on off-season surgery to get the center to 100%.

Texas, according to the players, has been holding very intense practices all season.

"I’m looking forward to [joining Texas for practice],” Roy told Mike Heika of the Dallas Morning News. "I think it’s a great opportunity for me on a lot of levels. First, I get to test the shoulder and get to push my workouts. Second, I get to see some of the guys who I might be playing with up here and get to know them a little better."

Roy is not eligible to play for the Texas Stars during the lockout. Along with Roy, goalie coach Mike Valley and assistant coach Curt Fraser are visiting the team this week.
injury report