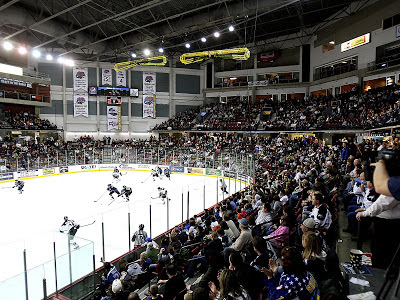 I am very pleased and excited to be introducing a new guest contributor to the readers this morning. John Mulhern IV will be writing weekly reports on the Idaho Steelheads for Hundred Degree Hockey starting this week. John is an unabashedly proud Flyers fan but just so happens to live in Boise, Idaho. He spent four years as the Steelheads film assistant and, before that, five years doing color analysis for the Penn State men's hockey team. John will bring both general information on the direction of the team and the league overall and also specific information on Stars prospects spending time in the Treasure Valley.

That’s right. Almost halfway through the season, the Idaho Steelheads are just one point out of the Conference and ECHL League best records. They had a tough end to their latest road trip, but a team that is 18-6-1-2 for the first 27 games of an interesting season (to say the least) is allowed to lose a game here and there throughout the season. But other than the 6-2 loss to the Ontario Reign (Manchester Monarchs)* on Saturday, the season has been a success.

With new head coach Brad Ralph and a host of what should mostly be considered AHL talent, the Steelheads didn’t get off to the best start, losing their first two games in a back-to-back/home & home scenario to the Utah Grizzlies (Abbotsford Heat). However, they then went on an 11 game unbeaten in regulation streak to alleviate any doubts that 1) Brad Ralph was the right hire and 2) players were starting to buy in to his system.

Over that stretch of time different players would put their stamp on things, including Tristan King. King would put up 4 goals in the Steelheads first win of the streak which was a 7-6 win over the Colorado Eagles (St. John's IceCaps). Former NHLer Adrian Foster had 4 assists, one on each of the goals.

Austin Smith would get his first professional goal a few games later in a 7-2 blowout of the Ontario Reign. Of course not to be outdone he scored two the following night in a 6-2 win over the same Reign team.

Tyler Beskorowany, who lost the first two games of the season, yielded to Josh Robinson who started the 11 game streak. What ended up happening was a goaltender rotation where Ralph would just switch between the two of them. Towards the end of the streak, the Texas Stars would call up Austin Smith and Josh Robinson for a quick look to see what they had in their prospects. Neither would see any game action, and they were sent back within a week, but the Stars were able to get a closer look at two prospects that they didn’t get a great look at the end of last season. Also Hubert Labrie got a brief look up with the Texas Stars during the streak.

The Steelheads would split the next handful of games, before going on an 8 game unbeaten streak that ended with Saturday’s loss to the Reign. During the streak Austin Smith had an 11 game point streak. He finally seems to be getting his legs underneath him and figuring out what he has to do to be productive at the next level. Personally, for him I think the 'next level' is the NHL. If he keeps developing and continues to work hard in his own end, I believe we are going to see him at the ultimate level.

Here is a quick look at other Texas Stars prospects:

Tristan King (19GP, 10G, 7A, 17pts)
Was kept out of the lineup for a few games. I believe it was because he had to buy in a little more to Brad Ralph’s system. But recently has fit into the system better.

Matt Case (27GP, 2G, 13A, 15pts)
Not a “contract guy” but spent time up in the AHL last season. Having a career year offensively for a very responsible defenseman.

Mathieu Tousignant (18GP, 2G, 11A, 13pts)
Playing his role very effectively. Still willing to go into the corners and do the work in the offensive zone and be the “Pest”.

Jace Coyle (16GP, 1G, 10A, 11pts)
Steady Eddy. Nothing flashy and never really notice when he is on the ice, exactly what you want out of a defenseman. Currently sitting at plus-3.

Hubert Labrie (22GP, 2G, 3A, 5pts)
Plays a bit more with the top lines and also looks for transition opportunities. Currently has a plus-10 rating.

Josh Robinson (13GP, 11-0-1-1, 2.65 GAA, .920SV%)
Has yet to lose a game in regulation. What started as a pleasant surprise has turned into what is expected every night. Only real question left is how he will handle a regulation loss.

Tyler Beskorowany (14GP, 7-6-0-1, 2.90 GAA, .903SV%, 1 SO)
In what can best be described as an up and down season Tyler has posted the teams only shutout, but has struggled to regain & maintain his form from two years ago which could have earned him Goaltender of the year, if he would have stayed in Idaho for the entire year.

Here is your season recap to this point. Obviously painted this picture with some broad strokes, however, as we move toward the halfway point of the season and into the second half, stayed tuned to this spot as I’ll continue to track the progress of the Steelheads and the Texas Stars prospects.

* — Similar to the Texas Stars Report on Defending Big D, we are adding the parent club of the ECHL clubs mentioned here for context.