Stars Claim 4-3 Win After Ten Round Shootout in Peoria 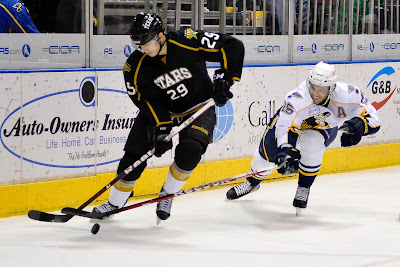 Alex Chiasson had the game-winning shootout goal in the tenth round. (Credit: Nathan Kerley/Peoria Rivermen)

The Stars needed ten rounds of shootout to do it but managed to pull off the win in Peoria, Illinois, this afternoon. After going down 2-0 early, Texas stormed back thanks to goals from Cam Barker, Jordie Benn and Reilly Smith. A late game-tying goal from Peoria sent the game to OT and then the shootout where Alex Chiasson won in in the tenth round. Cristopher Nilstorp stopped 38 of 41 in regulation and OT and 9/10 in the shootout for the win.

The game completes a three-in-three weekend with four points and sets the overall road trip point total at eight points in five games. The Stars are now 7-2-1-0 in their last ten.

Feeling the fatigue of three games in three nights, Texas had a rough first period. The Stars allowed two goals in the period off thirteen Peoria shots. Their first came as Mark Cundari bombed a shot on Nilstorp. The Texas tender lost track of the puck after blocking it and the puck found the stick of Tyler Shattock for his first of the year.

Derek Nesbitt had the Rivs' second goal on the power play. T.J. Hensick backhanded the puck over to Nesbitt, who one timed it from just above the circles.

The Stars held the Rivermen off in the second period despite being outshot 8-3. Luckily, one of those three shots found twine. With just 7.9 seconds left in the frame, Reilly Smith dished the rubber from the corner to Cam Barker at the right point. Barker's shot got through everyone to cut the Peoria lead to 2-1.

Texas poured it on in the third period. Jordie Benn continued his red-hot play with an even-strength marker at 9:13 of the frame. The initial shot from Toby Petersen was tapped home by Benn to tie things at two. Reilly Smith, also on fire as of late, scored almost immediately afterwards. Coming off a faceoff, Smith shot one in on Jake Allen at a bad angle and set the score at 3-2 for Texas.

The rookie, however, would give that one back late in the third as the Rivs worked to tie the score and earned a power play. Smith went to the box for tripping and Peoria went 6-on-4. Derek Nesbitt evened it all up with 3.6 seconds remaining in regulation. Patrik Nemeth unluckily broke his stick attempting to clear the puck, allowing Nesbitt a second effort on a free puck.

After five minutes of scoreless overtime, the Stars went to their fourth shootout of the year. Tomas Vincour scored in the third round but was quickly negated by a goal from Phil McRae. Texas would need extra rounds yet again. Finally, in the tenth round, rookie winger Alex Chiasson banked one off the left post and behind Jake Allen for the 4-3 win.

The Stars will complete their road trip with a game against the Milwaukee Admirals on Wednesday before returning home on Friday to face Houston.