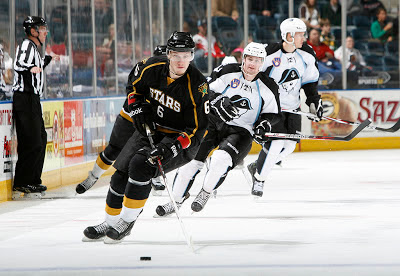 The Stars penchant for comeback wins continues tonight with a 2-1 victory in Milwaukee tonight. The Stars allowed the first goal but stormed back to set their road trip record at 5-1. Texas tender Cristopher Nilstorp and Milwaukee goalie Jeremy Smith were both fantastic, but Nilstorp was one shot better in the end. Both goals stopped 24 shots. Texas is now 7-8-1-1 when giving up the first goal and moves to three games above .500 for the first time this season. Finally, the Stars should jump into the conference's top eight slots with the win, also known as playoff contention.

Despite two power plays, Texas was unable to score in the first period. Milwaukee also failed to find the scoresheet in the opening frame, managing five shots to Texas's seven.

The first goal of the game came in the second period as Austin Watson potted his team-leading eighth goal of the season on a fluky play. Texas goalie Cristopher Nilstorp appeared to have the puck gloved, but Watson was Johnny-on-the-spot as Nilstorp lost control of the puck and allowed the tally. The Stars killed their first penalty of the game in the period and had a tie in shots at eight a piece. Nilstorp was solid otherwise in the period, snagging a few good chances from the Ads.

Texas evened things up on the power play in the third period. The Admirals were found guilty of a too many men penalty, which the Milwaukee bench vehemently disagreed with. It was Cody Eakin making the Ads pay with his first goal since November 11th. His top shelf goal over a sprawled Jeremy Smith was assisted by Matt Fraser.

The Stars survived a late period tripping minor and took the game to overtime, guaranteeing the extra standings point.

In the four-on-four OT, Sceviour started the game winning play. Passing it back to Benn, the puck was then shuffled to Tomas Vincour, who bombed it on net. Colton Sceviour had meanwhile driven the net and picked up the rebound for the 2-1 victory.

The Stars will return home to Cedar Park to face Houston and Peoria this weekend.