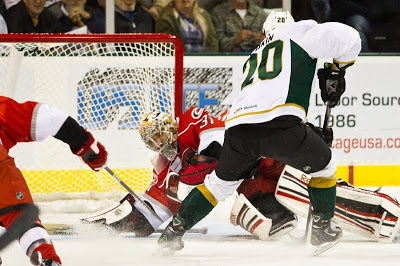 Something about those Charlotte Checkers brings out the best in the Texas Stars. In three games, Texas has beaten the conference-leaders, all in relatively tight games.

"Charlotte's got a real good team," said Coach Desjardins postgame. "Every game's been close and could have gone either way."

After allowing the first goal, Texas stormed back with three straight to seal up a 3-1 win and break a three game losing streak.

"We're both speedy teams and, for whatever reason, they bring out the best in us."

Speed was on display tonight as Taylor Vause beat out a few icing calls and got a primary assist on Texas's first tally by Petersen thanks to his skating.

"Our speed [matches well with Charlotte]," said Alex Chiasson, who scored a power play goal in the game. "We have four lines and defensemen that can skate. That's what we think is our biggest strength."

The Stars got behind early in the first with Zac Dalpe completing a tic-tac-toe play to find twine behind Nilstorp. While not technically a power play goal, the score came just as Reilly Smith stepped onto the ice.

"Those are tough," said Vause. "You work hard and get chances and then they get a power play and score one right at the end. It shows our character that we can come back."

Speedsters Toby Petersen and Taylor Vause combined for the tying marker eight minutes later as Vause tracked down a puck in the corner and centered it to Petersen, who tucked it in high on the left side for the 1-1 score. The Stars would go to the room tied at one but up 13-6 on shots after twenty.

The Stars added a goal each in the next two periods as they rolled four solid lines against the Checkers. Alex Chiasson scored a power play goal on a tip play in front off the initial shot of Reilly Smith. With a goal and an assist on the night, Chiasson is on a four game point streak.

Texas killed a Brenden Dillon roughing minor as the second period wore on to hold their one goal lead. They ended the period with a 25-18 shots advantage.

Charlotte swung the balance the other way in the third period, outshooting Texas 13-6 as they worked to even the score. Instead, it was Cody Eakin creating problems for goaltender Dan Ellis. Eakin scored his tenth of the year, despite his full face shield, off a nice dish from Alex Chiasson, who was glad to have his centerman back on the ice.

"Eakin is a great leader. He doesn't talk much, but he leads by example on the ice and makes a difference."

The insurance goal ended up being all the Stars needed to grab the two points from the conference leaders. Texas is now 10-0-0-0 when leading after two periods. The win moves the Stars up to 37 points and sixth place in the West, tied with Houston.

Coach on various player injuries:
Glennie: "be able to play [next week]"
Vincour: "tough hit, he'll be out for a little while"
Sloan: "at least another week away, hasn't come along as quickly as we hoped"