Stars Earn Point in Houston But Fall In OT 4-3 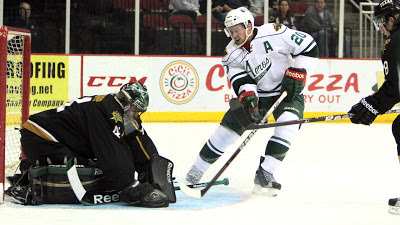 Texas played tight with the Houston Aeros tonight at the Toyota Center but ultimately came up short in the overtime period. The Stars came back from three one-goal deficits to earn one point for the tie after sixty minutes. Cristopher Nilstorp stopped 25 of 29 shots against, and Texas got goals from Fraser, Eakin and Roussel.

Despite the loss, Texas's single point will keep them in sole possession of second place in the South Division and fifth in the Conference.

Mikael Granlund opened the scoring for Houston, scoring off the rush on the second shot of the night in the seventh minute. Matt Fraser tied it up at one with a third-effort goal just six minutes later. The Stars outshot Houston 8-4 in the period.

The second period played out much the same. Houston went first on the scoring sheet with Justin Fontaine centering a pass to Nick Palmieri for his ninth of the year and a 2-1 lead. Cody Eakin got it right back on the power play with a severely bad angled shot in the eighth minute. Houston's Charlie Coyle notched his eleventh of the year before the end of the middle frame. The power play goal was assisted by Granlund and Zucker and set the score at 3-2.

'Fourth-liner' Antoine Roussel scored in the final frame to tie the score at three once again. Roussel's goal was initially not called and play continued with an Aeros' rush up the ice. The Stars got their goal at the next stoppage as a review was called and the puck was deemed to have crossed the goal line fully. Texas would need overtime for the second straight contest against Houston.

Again, however, it was Houston getting the third point in the game as Kyle Medvec potted his first of the year off a rebound of a Mick Palmieri shot for the 4-3 OT win.