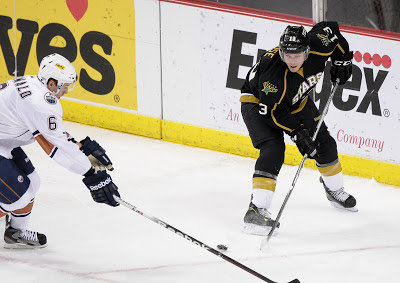 The Texas Stars announced today that they have officially re-signed Taylor Vause to a second PTO. His first tryout was set to expire after Satuday's game in Abbotsford. The rookie center has played in nine games for Texas but has yet to tally a point for the club. The second 25-game tryout will extend him until the February 15th game at Oklahoma City. At that point, Texas must sign Vause to a standard contract or release him.

This was an expected re-signing based on comments from Scott White yesterday posted to the blog.

Vause, 21, originally signed a 25-game PTO with Texas at the end of training camp and has appeared in nine games so far this year. The Calgary, Alberta native made his professional and AHL debut with the Stars last season on March 19, 2012 at home against the Abbotsford Heat, while on an amateur tryout (ATO). Vause has played in 14 career AHL games for Texas and has two points (1 goal, 1 assist) and two penalty minutes. During 2011-12, his final junior season, he was the captain of the Swift Current Broncos of the Western Hockey League, where he led the team in goals (37), assists (46), and points (83).