Tryouts Ending for Barker, Vause; Will They Be Extended? 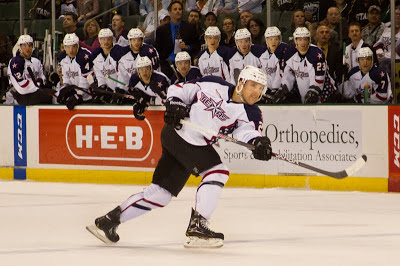 A standard AHL professional tryout (PTO) is twenty-five games long. Surprising as it may be, Texas will hit that 25 game mark this Saturday at Abbotsford. The Stars have two players on PTOs currently: NHL vet defenseman Cam Barker and AHL rookie forward Taylor Vause. Each is in a different place in their career, but I think both will be re-signed this coming weekend.

I reached Texas Stars GM Scott White this morning to talk about his expectations of the contracts and how the two players have performed for him this season.

Cam Barker had an early adjustment period to the AHL game. He was coming off injury and immediately began logging top-pairing minutes along with significant power play time.

"I think Cam's adjustment early on wasn't as good as he would have liked or I would have liked," said White. "I don't know if he was completely ready to take that on with injury last year. Recently, I think he showed some experience and played better and more consistently."

The ice time has been divvied up a bit more in recent games, which White feels has benefited all the defensemen. Barker has three goals and five assists over twenty-two games of work. 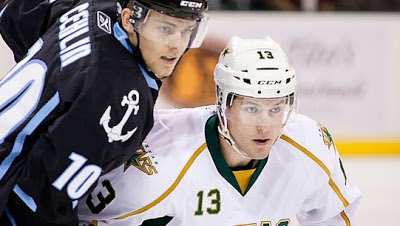 Taylor Vause is in a bit of a different situation, having only played in nine games so far this season. White commented, "It's not an easy scenario. [Limited playing time] is something Taylor and I discussed in the summer and something that he knew was a possibility."

However, the GM sees some elements in Taylor's game that lead me to believe he will stick around for another PTO.

"He has elements of his game that I like: good character, good teammate. Also, he's a center. When the timing is right, he'll get more of an opportunity. I commend the player. He's been a good pro, practicing hard. He's certainly got to get in more games here."

Ultimately, Texas will have to make a decision this week on the two players. White has been in conversations with both about the upcoming PTO completion and possible extensions.

White added, "We could have something prior to this weekend depending on how the week goes."
player contracts