Cody Eakin on His Time In Cedar Park 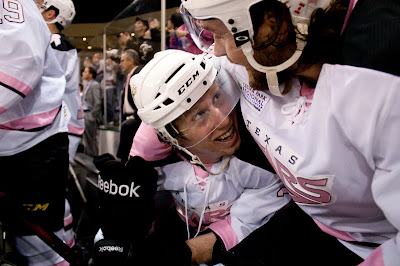 It's a little delayed, I admit, but back when we thought Cody Eakin was playing his last game in Texas, January 6th, I asked him to reflect on his time here. I think he shows great character with his short quote.

"It's been a great series of events. Getting trading here and having an opportunity to play a lot of minutes. It's a young group of guys. We were a little tentative at the beginning of the season, but if you look at us now, we can face the best teams in the league. We've grown together. It's been half a year but it feels like a lot longer than that. Whatever happens in the next week, it'll be a new challenge. We've come a long way since the first few games and it's been a lot of fun."

Eakin's experience in the AHL certainly helped in earning him a spot on the second line in tonight's game at Joe Louis Arena.
interviews quick hits