Colton Sceviour Sent Back to Texas 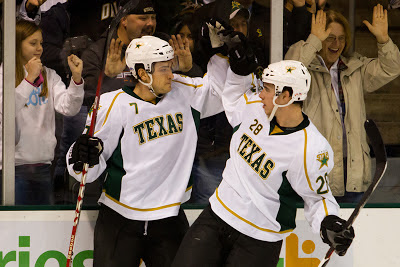 Dallas announced this afternoon that they are returning Colton Sceviour to the Texas Stars. Sceviour got into one game while in Dallas, earning his first NHL assist on a Ryan Garbutt goal. This helps Texas greatly on the numbers side, if nothing else. Texas has been skating no more than eleven forwards in their past few games.

Sceviour, 23, has been recalled to Dallas twice this year. The Red Deer, Alberta native made his 2012-13 NHL debut last Saturday at American Airlines Center against the St. Louis Blues, recording his first career NHL point with an assist on Ryan Garbutt’s third period goal. In 32 AHL games with Texas this season Sceviour has a plus-10 rating and 24 points (11 goals, 13 assists), which ties him for third on the team in scoring. He was Dallas' fourth-round selection (112th overall) in the 2007 NHL Entry Draft.