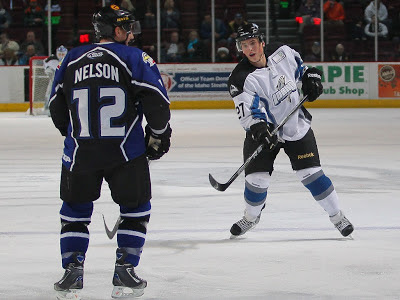 Another transaction today as Texas announced they have recalled Jace Coyle from the Idaho Steelheads. With the anticipated callups of as many as three defensemen to Dallas for training camp, the Stars needed blue liners. Coyle, who has just come back from a foot injury, fits the bill.

The 22-year old was initially on Texas's roster at season start but played no games. He has made it into 18 games in Boise with one goal and twelve assists. He has played important minutes on the power play while there. It should be interesting to see how his game has developed.

Right now, this means Texas has nine defensemen: Coyle, Dillon, Nemeth, Fortunus, Baldwin, Labrie, Sloan, Benn and Oleksiak. Texas can expect that Jordie Benn and Brenden Dillon will go to camp; Glen Gulutzan said as much in yesterday's media availability. One more player could go up as well. Personal feeling leans toward Oleksiak, who has shown extremely well in the first half of the season.

The Texas Stars, proud American Hockey League affiliate of the Dallas Stars, announced today that Dallas has reassigned defenseman Jace Coyle to Texas from the Idaho Steelheads, their ECHL affiliate.

Coyle, 22, made Texas’ opening night roster out of training camp, but did not appear in a game before he was reassigned to Idaho on October 23. The Cranbrook, British Columbia native has played in 18 games for the Steelheads this year, scoring 13 points (1 goal, 12 assists), 18 penalty minutes and a +9 plus-minus rating. Coyle suffered an injury in early December and missed ten games. He returned to the lineup this past weekend and in Idaho’s last two games he had two assists and a +6 rating. In his second professional season, Coyle appeared in 48 games as a rookie for the Stars during the 2011-12 season, recording five points (1 goal, 4 assists) and 6 penalty minutes.