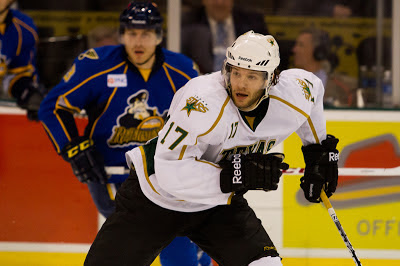 Dallas swapped Tomas Vincour in for Sceviour on their roster today. Sceviour made the NHL opening roster but did not make it into any contests over the past week. Texas is still one forward short for tomorrow's game.

Vincour, 22, has skated in 39 games for Texas this season earning 19 points (7 goals, 12 assists) with a plus-4 rating. Now in his third season with the organization, Vincour has posted five goals and seven assists, totaling 12 points in 71 games in the NHL. He comes to the Stars after playing three seasons in the WHL, where he earned over 35 points in each of his campaigns. The 6-foot-2 forward is one of only six players born in Brno, Czech Republic to skate in an NHL contest and one of only two to earn over 10 career points. Vincour was Dallas' fifth-round selection (129th overall) in the 2009 NHL Entry Draft.

Sceviour, 23, did not skate in any contests while being recalled by Dallas. He returns to the Texas Stars tied for the team lead in game-winning goals (3), tied for third in plus-minus (+9) and tied for fourth in scoring with 23 points (11 goals, 12 assists). The Red Deer, Alta. native was Dallas' fourth-round selection (112th overall) in 2007.